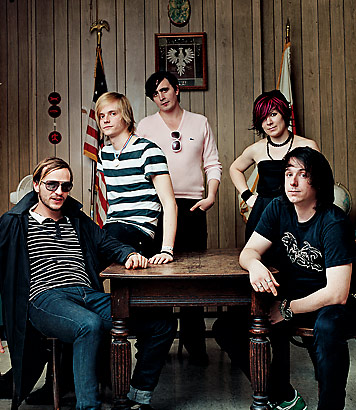 The list of Eddie Argos’ artistic achievements is as long as it is goofy and dubious. The barmy Brit has, to date: performed onstage with his old outfit the Art Goblins utilizing a vacuum cleaner as an instrument; gotten so obsessed with short-lived Britpop outfit Menswear he penned a song about its leader (“I Wanna Be Johnny Dean”) and filmed himself in a documentary, unsuccessfully tracking the singer all over London; and adopted an outrageous faux-Cockney persona for his latest alt-rock group Art Brut, wherein songs like “My Little Brother” slur into “moy lih-uhll bruvva.”

“I just kinda like funny things,” shrugs Argos. But the kooky conceptualist’s coolest coup, he swears, isn’t Bang Bang Rock & Roll (Downtown), Art Brut’s addictive, punk-riffed debut, nor its self-aggrandizing singles (“Formed A Band” brags about—what else?—the act of forming a band). No, Argos smirks, his greatest work occurred at the end of high school in Bournemouth, the hometown that now despises him after he was quoted in the press as wishing it would fall into the sea.

“See, everybody in the Art Goblins were all gonna intentionally fail our O-level [exams], not go to university and be in a band together, permanently,” he recalls. “Apparently, I didn’t communicate this properly, because I failed mine on purpose, but they all passed and went right on to university.” Argos goes on to detail his plan: “I had to write an essay about something pertinent in sociology. So I wrote about The A-Team. People said that The A-Team made children violent, and I argued against that by ignoring all these famous sociologists and just quoting The A-Team, as well as Cagney & Lacey and The Dukes Of Hazzard.”

The paper became something of a campus legend. Argos moved to London and got serious (well, sort of) about becoming a professional musician. And Art Brut was finally whelped.

“All because I was mucking about,” he says. “Having some fun.”