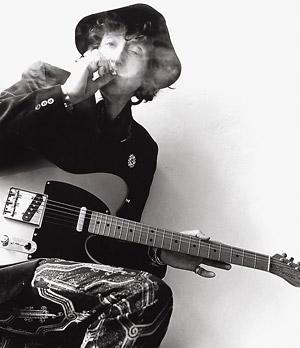 The first time I met Nikki Sudden, he was writing for ZigZag magazine. He came down to Birmingham, England, in 1980 to write an article on the Subterranean Hawks, my band with singer Steve Duffy (who’d later co-found Duran Duran and form the Lilac Time). Nikki said to me, “If the Hawks ever split up, we should form a band together.” He turned up with his guitar one day on my doorstep shortly after the Hawks had split up. He was that kind of guy, always there and ready to play at any opportunity.

I’d just got this band together called the Bible Belt, and somehow things came together in a strange way when Nikki asked me to play guitar on his second solo album. (The title of it is The Bible Belt. Ha!) We hung out together, started writing songs, listening to the Faces and Stones. I guess somewhere around then, the Jacobites were born.

Now Nikki is dead. He died on my birthday, just as we were planning the next Jacobites album to come out in 2006. I remember my girlfriend saying, “You went to answer the door last night.” It was as if someone wanted to be let in. I heard the news the next day.

We had our ups and downs, our ego things, but we’d always be back together after our solo projects. I’ve come to realize how much work he put into getting gigs and staging tours—nearly always on his own, with no help from hardly anyone. But at least he will be remembered, and the actual worth of the music, well, I find it hard to judge my own stuff half the time. A friend of mine said to me the other day that he honestly believes the Jacobites’ 1985 record, Robespierre’s Velvet Basement, is the best album ever made. Sometimes, I just can’t take that in. To me, it was just me and Nikki sitting around playing our songs to each other with a couple of guitars.

I hope the rest of the world gives a little more respect to Nikki’s stuff now that he’s gone, though I never liked that remark much. As Johnny Thunders said, “The only way you get respect is when you die, if you’re a friend of a mine.” Nikki is still alive to me, and I’ll keep playing those Jacobites songs and keep it alive. He did it for his late brother Kevin (Godfrey, a.k.a. Epic Soundtracks, Nikki’s bandmate in Swell Maps), and I know that’s what he would’ve wanted.

You don’t find a lot of guys who would’ve kept going for little or no money in this business for all those years. And you don’t find many who are into exactly the same music as you. He was a rock ’n’ roll soldier. I guess he went the way he would’ve wanted to go, but I think he thought it would be many years down the road.

Adios, my friend. For now.

robespierre’s velvet basement IS the best albun ever made !!!!!!

robespierre’s velvet basement IS the best album ever made !!!!!!

Yep! Robespierre’s Velvet Basement up there as one of the best.

I never really bothered with his music when he was alive, he was a friend and I wasn’t that worried. Now I listen to his stuff alot. Miss him. Check his music out. If you love Dylan, Stones, Gram, Faces you’ll love it.

Nice words, Dave! And RVB really is a classic album. You know when people ask about what your Desert Island Discs would be? Well, ‘Robespierre’s…’ is definately one of mine and th first I’d choose every time. I’ve been listening to it for 16 years and it still sounds fresh. A beautiful piece of work. Thank you Nikki & Dave. Peace xx.

I remember finally finding a copy on vinyl before the secretly canadian reissue and burning it to disc and listen to the album constantly. I was on tour through Europe and it was my Epic Soundtrack for that winter. Never saw Nikki but truely idolized his work (even stealing a few lines here and there). It’s guys like him that keeps dreams and adventure alive.

equal game changer, people think they are smart and know a lot, but they hear them and they are changed. Only a liar or musical thief would deny their greatness.
I just introduced a college kid to them, and he keeps coming up to me after church saying “Mr. Planck, I love the Jacobites” He is so enthused as any lover of good music should.

Nikki Sudden was an artist, he did not get either fortune or fame, but his art is a great mural of music. I will never forget the first time I heard “Ambulance Station” I went from loudest to quietest, I even cried. Then French Revolution was the guitar fuzz that showed even more “The French Revolutions coming, and the blues have taken hold.”

Thanks Nikki Sudden, and you too Dave Kusworth.