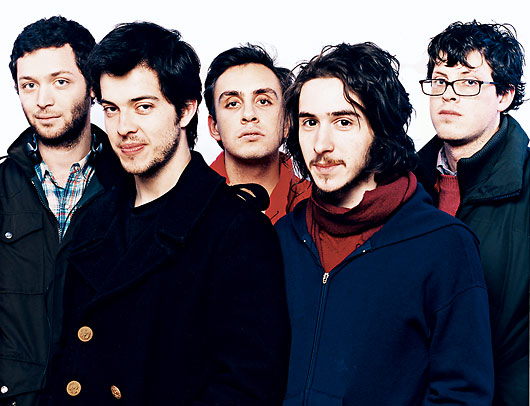 Let’s get this right out of the way: The Harlem Shake is a dance style developed in Upper Manhattan a few years ago, akin to the Lean Back, the Walk It Out or the Chicken Noodle Soup. Harlem Shakes, on the other hand, are a garage-pop band from Lower Manhattan and Brooklyn. Though you might not think it to look at them, Harlem Shakes draw heavily on the music that soundtracked similar dance crazes that came out of black-community dance halls in the ’50s and ’60s.

The band specializes in guitar-centric pop, to be sure, but the five songs on its self-released debut EP, Burning Birthdays, bubble up with sugary soul harmonies, cheery horns and fuzzed-out keyboards. The result is as much Curtis Mayfield and Shangri-Las as it is obvious New York City rock touchstones such as the Velvet Underground and Television.

Singer Lexy Benaim and drummer Brent Katz say they cycled through dozens of members (and plenty of band names) over the course of a decade before coalescing as Harlem Shakes in early 2005 with bassist Jose Soegaard, keyboardist Kendrick Strauch and guitarist Todd Goldstein. Produced by Chris Zane (Calla, Les Savy Fav), Burning Birthdays leads off with the jittery “Carpetbaggers,” which incorporates girl-group harmonies, falsetto vocals and saxophone. “Red Right Hands” matches desperate, manic singing with more backing harmonies, a twirling guitar line and a foggy organ tying the wall of sound together. Members of Beirut and Antibalas were called in to add horns, strings and other dashes of color.

Buzz on Harlem Shakes grew steadily over 2006 even with only a few underdeveloped mp3s scattered around the Internet, a Web site under construction and a bare-bones MySpace page. Word of mouth circulated concerning Harlem Shakes’ electrifying live show, in which the physical dynamism of the band members is matched by the catchy allure of their tunes.

“In places like Montreal, people knew us from the Internet, and we got a great audience that just erupted right away,” says Benaim. “It’s important and exciting to go out there and convince people, to feel the arc of the live show. At the same time, I am totally interested right now in making more records.”

Benaim is pleased with the EP but anticipates the band’s sound will expand further on future outings. While they won’t offer details, it’s rumored Harlem Shakes have already been courted by major and indie labels alike. With bands such as Clap Your Hands Say Yeah making a convincing case that you can sell boatloads of albums while sidestepping labels altogether, however, it’s attractive to retain autonomy.

“We only want a record deal if it offers something we don’t already have,” says Goldstein. “We have a very competent team of people right now.”

“And the thing is,” Strauch is quick to add, “we already have a van.”