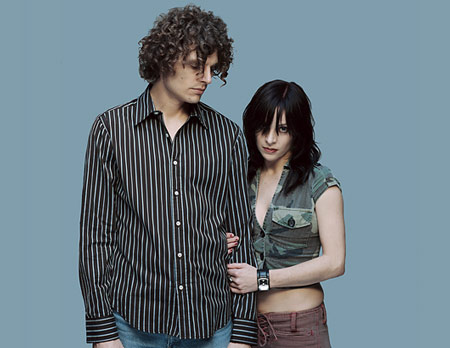 Strung out on drugs, abandoned by their record label and on the verge of collapse, Dimitri and Melanie Coats—the husband/wife team behind Burning Brides—decided not to fade away. Moving from Philadelphia to L.A. and adding drummer Pete Beeman, the band reclaims hard-rockin’ grunge from the whining, goateed dolts with Hang Love (Modart/Caroline), making it evil and weird again.

AEROSMITH “Nobody’s Fault” (1976)
Dimitri: So you don’t like Aerosmith? Maybe you haven’t heard Rocks. These guys were the poor man’s heavy Stones. The solo is so badass on the fade-out. This is where it’s at as far as rock-attitude guitar playing is concerned. Joe Perry ain’t no joke.

NIRVANA “Negative Creep” (1989)
Melanie: I remember sitting on this crazy rug we bought but couldn’t afford and watching the clip of this song (from 1994’s Live! Tonight! Sold Out!! home video). I couldn’t stop rocking back and forth. Dimitri and I hadn’t even formed Burning Brides yet. We’d been together about a year and just moved into this Jersey City basement apartment. Dimitri was painting the walls dark green. Our cats would climb up into an opening in the ceiling and hunt for mice.

SOUNDGARDEN “Jesus Christ Pose” (1991)
Dimitri: One of my best experiences so far was getting to record and rock out with Chris Cornell. Once I sat down and played guitar with the guy, I realized he’s the one who wrote so many of those sick Soundgarden riffs. Standing in a room with that voice and playing “Jesus Christ Pose” at full volume doesn’t suck.

THE VERLAINES “Joed Out” (1984)
Melanie: I’ve been going through a New Zealand obsession for the last few years that started with the Bats and has moved on to the Verlaines. Jacy Webster from the Strapping Fieldhands gave Dimitri a cool job at the Philadelphia Record Exchange and turned him on to lots of fun stuff from the Flying Nun label.

ALICE IN CHAINS “Again” (1995)
Dimitri: It took me years to get over the exaggerated, goat-like vibrato in Layne Staley’s voice, but now I can’t get enough. Fucker could sing. Queens Of The Stone Age owes these guys. Wait, is Mark Lanegan still in Queens? If he is, then never mind.

THE WIPERS “Romeo” (1981)
Melanie: I love the chugging guitar and bass riff and hearing Greg Sage scream, “This is not Juliette!” It sends chills up my spine. “Romeo” reminds me of the time we’d driven across the country with all our stuff in a stolen Ryder truck. We couldn’t afford San Francisco, so we called Tim/Kerr Records in Portland, Ore., and asked if it was cool and cheap up there. They were like, “Yeah, but don’t move here. We like it the way it is.”

SMASHING PUMPKINS “Geek U.S.A.” (1993)
Dimitri: This is the best song they ever did, and everyone knows it. Billy Corgan’s voice actually works on this one, and if you got rid of all the tracks except the drums, it’d probably still be a great song. Drummer Jimmy Chamberlin once stood on our living room table and shouted, “I’m the only guy in the world that can do that! Rewind that!”

THE KINKS “Waterloo Sunset” (1967)
Melanie: One of the highlights of my life was seeing Ray Davies perform on a tiny stage in Massachusetts. As he was leaving the stage, I ran up to the front and asked him to play “Waterloo Sunset.” He had his roadies bring his gear back, then sat down in front of me and played it right to me. He said, “This one goes out to all the lonely people in the world.” He came over to me afterward and kissed my hand.