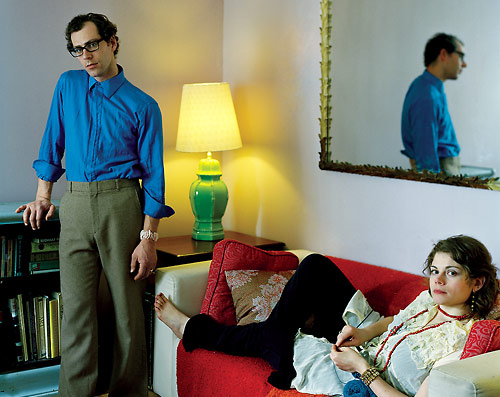 Bless the new breed of indie rockers willing to go out on a limb creatively—and procreatively—by simultaneously making adventurous music and keeping the home fires burning. Such is the happy domesticity of Ben and Vesper Stamper: Music is at the heart of their marriage, but it was only after they began a family that the songs started multiplying.

“When we had kids, that’s when things started really happening creatively for both of us,” says Ben from the couple’s home in Orange, N.J. “Our music and our art somehow came into focus so that our voices came through a little more clearly.”

Debut album All This Could Kill You, issued on Danielson leader Daniel Smith’s Sounds Familyre label, brings together lyrics triggered by Ben’s work (he transports fine art between galleries and serves as a church elder at Lamb of God Fellowship) and music that ebbs and flows with the post-rock rhythms of the Sea And Cake, the sweet and low bossa narcotica of sleepy Brazilian psych/rock and the banjo pluck of forest folk. The Stampers’ lightly entwined vocals drift throughout like earthbound angels, Vesper’s delicately coloring Ben’s with an intimacy that his fellow baritones Stephin Merritt and Scott Walker might blush at, then envy. Minor-key songs such as “Vow Takers” could be easily interpreted as scenes from a marriage, as some reviewers—and one member of the duo—have done.

“One of the frustrating things about our music is me trying to ask Ben what his songs are about, thinking they are songs about our lives and marriage, when they’re about a conversation he overheard on a train,” says Vesper, an apprentice midwife.

Still, the love comes through loud and clear. The two met as art students playing a sparsely attended Western Massachusetts music festival in 1996. Vesper wrote “folky, crunchy, granola hippie” tunes, while Ben had been recording delicate guitar-pop albums with high-school chum Chris Weisman under the name Clov. Ben and Vesper kept in touch and fell in love, yet failed to mesh creatively until about a year ago when Vesper was pregnant with their second child and, in a flash of inspiration, wrote seven songs in three days. Ben was similarly motivated after a New York City performance by Feathers and Sufjan Stevens, the latter of whom had played a Stamper house show early in his career.

The Stampers sent a demo of their songs to Daniel Smith, who agreed to produce their album at his New Jerusalem Rec Room studio in Clarksboro, N.J., incorporating arrangements by Weisman and Ben’s older brother Josh; banjo, woodwinds, piano and vocals by Stevens; vocal harmonies courtesy of Smith’s wife, Elin; and drums by Danielson’s David Smith.

“Sonically, the only goal was to reflect relationships of the people playing and reflect the time of the recording,” says Ben. “It just had a family-type feeling.”

i’ve fallen asleep on that couch

[…] “The Stampers’ lightly entwined vocals drift throughout like earthbound angels, Vesper’s delicately coloring Ben’s with an intimacy that his fellow baritones Stephin Merritt and Scott Walker might blush at, then envy.” —Kimberly Chun, Magnet Magazine […]