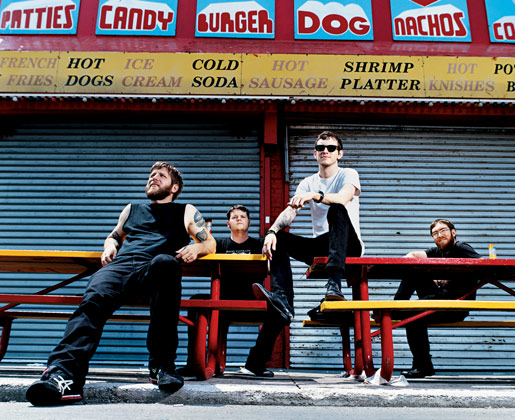 Given the droll, acerbic wordplay and brainy, quasi-political themes of New Wave (Sire)—the fourth Oingo Boingo-on-methedrine slugfest from Gainesville, Fla., pop/punk outfit Against Me!—you’d probably picture frontman Tom Gabel as a smooth talker capable of chatting his way out of the most menacing confrontations. Not so, he counters.

“I usually talk myself into fistfights,” he admits. “I’m almost a magnet for them. I’m a horrible fighter, too, kinda tall and lanky. Don’t get me wrong—getting hit really hurts. But with me, it’s not so much the punch; it’s more the fact that when I get punched, I’m immediately thrown off balance, so I’m all over the place and can’t hold myself up.” He adds an unnecessary afterthought: “It just really sucks.”

Gabel—an Army brat who relocated as a teen from exotic Naples, Italy, to ho-hum Naples, Fla.—grew up shouting acoustic protest songs at redneck locals. So shouldn’t this scrappy punk rocker be ready to defend his viewpoint at all fisticuff times? Again, not exactly. Hence a rather humiliating incident that occurred in November at the wedding of Against Me! guitarist James Bowman.

“My girlfriend and I were at this bar across the street from our hotel,” says Gabel. “She went up to get drinks. I looked around and saw her arguing with three guys. I walked over to see what was happening—one of the dudes had groped her, I found out later—and out of nowhere, no punches had been thrown, nothing, a security guard came up behind me, put me in a headlock, dragged me around and threw me face-first down a flight of stairs. So all the wedding pictures were amazing, because I had this road rash all over one side of my face. See? I attract it.”

Gangly spiderlegs, however, can sometimes come in handy, like when Gabel was literally running for his life after a recent Against Me! gig in Germany. Soldiers from a nearby U.S. Army base had caught the set and were so angered by his anti-Bush rhetoric they actually chased the band’s tour van out of town. Fleet feet also help when you’re ducking Yanks in general overseas, something that’s addressed on the sneering “Americans Abroad.” The New Wave track echoes Gabel’s deep-rooted “hatred of the way Americans act in Europe and their attitude of, ‘You should speak English. I shouldn’t have to learn how to speak your language.’ I often feel so embarrassed over there. I just avoid other Americans like the plague.”

The old adage about speaking softly and carrying a big stick is lost on the 26-year-old iconoclast. When he formed Against Me! in 1997 as a solo conceit after home-recording 10 snotty originals on a four-track, Gabel forcefully barked his thoughts from the stage. Having dropped out of high school at 16 (“I was getting beat up a lot back then, too, because I was the punk kid with spiky hair”), he moved to Gainesville two years later. Gabel found a drummer and played for a year as a White Stripes-ish duo. Against Me!’s current lineup of Bowman, bassist Andrew Seward and drummer Warren Oakes solidified in 2002, and Gabel’s singing voice, which he imagines as “a cross between Jim Morrison and Axl Rose, my two biggest influences growing up,” has only become bolder and brassier over time. On New Wave (produced by Garbage man Butch Vig, who knows a thing or two about mixing bold vocalists), it positively dominates the edgy, razor-riffed terrain.

On anthems such as “Piss And Vinegar,” “Up The Cuts” and the Nelson Algren-inspired “Borne On The F.M. Waves,” the main motif is non-conformity. With its revolutionary battle cries, Against Me! speaks to a generation that’s wise to governmental treachery. “Well, you would hope,” says Gabel. “But I don’t know sometimes. Me and my friends in Florida were all part of the activist scene that was happening, and it seemed like there was this huge movement that was building, and it had such momentum worldwide. But then 9/11 happened and just fucking wiped it out. And I just don’t know where the protest movement is anymore. And you’d think because things have only gotten worse that the movement would still be growing.”

Gabel has high hopes that a simple Against Me! diatribe can at least spur one clearheaded fan to action. But he’s also found that time wounds all heels in the end, even his former hometown oppressors, whom he occasionally bumps into when spending Christmas there with his mother. “There’s this one bar in Naples that all the people in town visiting their parents go to,” he says. “I’ll go there just to look at all the people who were total fucking assholes in high school and see how they’re falling apart. I’m like, ‘OK, you’re bald, you’re fat, and you over there, you’ve obviously had plastic surgery. You all look like shit. Awesome! Cool! I’m going home now!’”