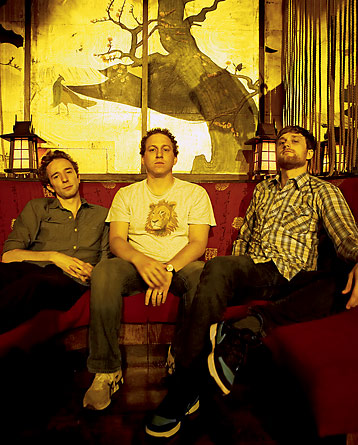 It’s difficult to imagine Mobius Band’s primary songwriters—multi-instrumentalists/vocalists Peter Sax and Ben Sterling—ever being pissed off about anything. At least not to the point where they’d punch someone or run out of a room screaming; that’d just be weird coming from two soft-spoken, small-town Massachusetts boys.

The last couple years, however, have seriously tested their temperament. On the eve of the trio’s first tour in 2005, drummer Noam Schatz temporarily left the band due to the sudden death of his father. (Sax and Sterling soldiered on with an iPod drummer until Schatz’s return 10 days later.) Meanwhile, Sax had been struggling to make it in Brooklyn, working as a temp. For his part, Sterling endured a painful break-up sparked by a close friend sleeping with his girlfriend. As Sterling puts it plainly, “A domino effect was happening, for sure.”

Bits and pieces of all this bad luck and heartbreak are strewn about Mobius Band’s second full-length, Heaven (Ghostly International/Misra), an album that blurs the line between indie rock and bittersweet synth pop. “I don’t blame you/You were only looking out for yourself,” sings Sax over the buzzing, backwater beat of “Friends Like These,” a mid-tempo electro track that points more than a few fingers at the “friend” who stole Sterling’s girl.

“This guy was a really good friend of mine, too,” says Sax. “So it was a little weird to find out he was screwing my other friend’s girlfriend. The first draft of the lyrics to ‘Friends Like These’ was actually really boneheaded—just a straightforward fuck-you song, so I changed it to become more universal. It doesn’t sound ridiculous now.”

“We definitely try to maintain a tension between dark lyrical content and [catchy] musical content,” says Sterling. “We’re not screamers, you know? We kill ’em with kindness.”

Mobius Band hasn’t written a record of woe-is-me confessionals, however. If anything, it’s difficult to pick up on the group’s recent misfortunes unless you listen closely to the lyrics. And who does that anyway? Especially when they’re overshadowed by a shifting soundscape of brain-burrowing harmonies and meticulously tweaked blips and beeps. The electronic sounds are largely the result of Schatz’s recent obsession with circuit-bent keyboards, which he constructs by shorting the circuit boards of old Casios and sampling the rather chaotic results. Or, as Sterling explains, “It’s like Autechre with a $5 budget.”

Above all, Mobius Band is determined not to sound like a rock band with beats. Sax and Sterling like the mix to be seamless: a target they hit squarely on Heaven. And if you don’t agree, well, Sterling doesn’t care. Years of working as a music-business publicist have taught him one important thing.

“Not to take any of this personally,” he says. “There’s just so much that goes into it, so you shouldn’t just say, ‘He doesn’t like it? What a dick!’ We’re lucky anyone’s paying attention at all these days.”