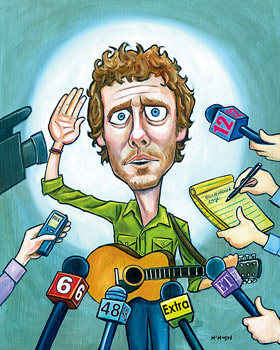 I spent a lot of time thinking about fame this summer. It started with the story I wrote elsewhere in this issue about a band called the Mendoza Line, which was as successful at ducking fame as it was at making great records. I followed the thread to a live performance by Glen Hansard and Markéta Irglová, the stars of the movie Once, who were astonished by the film’s impact on their music careers. Before its release, they had played to a tiny crowd at the Tin Angel, an intimate folk club in Philadelphia. Now they were playing at a sold-out theater-style venue in Philly that’s hosted everyone from Radiohead to Ray Davies.

Hansard is also the lead singer and songwriter for the Frames, an Irish band that’s been plugging away since the early ‘90s. He was all too keenly aware that this little independent film was making a bigger splash than his entire career with the Frames.

“It’s like I’ve spent the last 17 years knocking on the world’s door,” Hansard said from the stage. “And now the world suddenly has turned around and said, ‘What do you want?’”

All those years seeking fame, and now he was freaked out to get a taste of it.

Meanwhile, for reasons best left unexplained, I attended two giant outdoor shed-type shows this summer. One featured John Mayer, the other Toby Keith. I didn’t much care for either performance—Mayer is the blandest rock star of all time, Keith is a shameless huckster—but I got an illuminating glimpse into the nature of fame. Watching Mayer pump out his vanilla hits, I thought of something the Mendoza Line’s Timothy Bracy had told me. His band had just played a set in New York and was sitting down with some heavy hitter from the music industry. Said Big Shot was explaining his strategy for breaking the band, laying out exactly what it would take to become famous.

“We looked at each other,” Bracy said, “and the distinct feeling was that none of us could imagine doing any of the things this guy wanted us to do.”

As powerful as the lure of fame is, there’s an undercurrent pulling some people in the opposite direction. And this, at long last, is sort of where I begin to get to the point. The Mendoza Line was a band in a grand rock tradition of self-defeating, self-sabotaging fame-averse artists. My first exposure to this idea was in John Mendelsohn’s brilliant liner notes for the compilation The Kink Kronikles. Ray Davies explained that he liked the name “Kinks” because, like a kink in your neck, “it’s something people don’t really want.” Compared to the approval-seeking antics of the Beatles, this was both revolutionary and intriguing to my young mind.

It was evident in many others. Big Star. Badfinger. The mid-’70s punk explosion was detonated by this idea. Attention was good, but only if you earned it a certain way. Playing by the record labels’ rules—slick music, slick image, slick photo shoots—was out. Artistic integrity was in. Money and fame were acceptable only on the artists’ terms.

This was probably bullshit, but as a teenager, I bought it. So did people like Paul Westerberg, Bob Mould, Michael Stipe and Paul Hewson, who spearheaded the next generation of great rock ’n’ roll bands. Knowing what a freaking diva Stipe became, it’s easy to view those early R.E.M. videos as if they were mere affectations. But at the time, in real time, R.E.M. was a band conscientiously avoiding the well-marked, highly traveled paved road to fame. Fame came, of course, but it was on the group’s terms. The same was true of Hewson’s band, U2. Before he was Bono, Nobel Peace Prize candidate, Hewson was an Irish kid studying Clash albums as if they held the secrets of the universe. (They do, by the way, but that’s another story.)

Westerberg and the Replacements were the most direct adherents to the Kinks’ approach, fighting each other as well as anything that might make them famous: “The sweet smell that you adore,” sang Westerberg, “well I think I’d rather smother.”

If all this seems terribly precious or beside-the-point to you, please consider this: The push-and-pull I’m talking about is what destroyed Kurt Cobain. When you look out into the audience and see the people you hate—or more to the point, the people who previously hated you—singing along to your most personal thoughts and feelings, that will seriously fuck up your shit. And poor Kurt’s shit was so fucked up, he could only think of one way out of the trap. The stakes aren’t always as high as life and death, but they’re pretty damn high.

Let’s fast-forward to an image of Joe Strummer from the documentary Let’s Rock Again!, which I happened to catch on cable one brain-numbed, channel-surfing evening. A man who belongs in any conversation about the greatest figures in rock history was reduced to pleading with some clueless fuckhead New Jersey DJ to play just one track from his most recent album. At one point, Strummer was cheerfully walking around the boardwalk in Atlantic City, trying to persuade passersby to attend his show that night.

There’s no way to explain the tears in my eyes as I watched this without referring to the Mendoza Line and Once and John Mayer and Toby Keith or invoking the names of Davies and Big Star’s Alex Chilton and Westerberg and Cobain. By the time Strummer and the Clash were successful, commercially speaking, they were through artistically. (Really, “Should I Stay Or Should I Go?”) As Strummer says several times in Let’s Rock Again!, he took 12 years off. The world kept spinning without him. By the time he was making really vital music again with his band the Mescaleros, no one gave a shit. He might as well have been Hansard and the Frames, knocking on the world’s door and being ignored.

So all of this was swirling around my noggin, and it got me wondering why exactly it mattered so much to me. Being a famous or obscure rock ’n’ roll artist isn’t relevant to my day-to-day life, you know? Of course you know. It isn’t relevant to most of us in our real lives. Or is it?

It sunk in that, in my own way and at my own level, I had lived my life much more like the Kinks and the Replacements than John Mayer and Toby Keith. I was never going to scoot up the corporate ladder, never going to wear the right suit or get the right haircut or kiss the right ass. In my line of work as a sports reporter, there’s no shortage of people who’ll go anywhere at any time of the day or night if there’s a TV camera set up there. Flip on ESPN some afternoon and you’ll see them shouting, mugging and acting as if they have all the answers. They have agents, they network, they cajole for airtime, they dye their hair. It’s as far from rock ’n’ roll as you can get, but the dynamic is the same.

Why do I get a queasy feeling when a TV or radio producer calls and asks me to appear on air? Why do I feel like a tin-plated phony when I give in and agree? Suddenly, I had an answer. I’ve been operating according to an ethos that makes almost no sense to anyone, trusting a gag reflex that isn’t doing me any good whatsoever. The sweet smell of TV gigs, expensive clothes and glib banter? I think I’d rather smother.