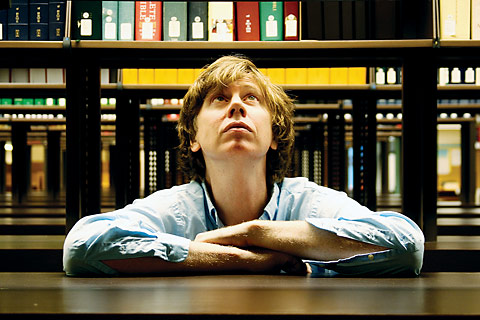 By the time you’ve finished reading this, Sonic Youth’s Thurston Moore will have probably produced, recorded or released another album or written another book. Recently, Moore issued an acoustic-guitar-driven solo LP (Trees Outside The Academy, on his Ecstatic Peace label), penned a tome on New York City’s downtown scene (the forthcoming No Wave) and spent the summer playing 1988 SY masterpiece Daydream Nation in its entirety to festival crowds.

Sonic Youth is the subject of Hits Are For Squares, an upcoming Starbucks compilation. Is Sonic Youth readying its proper Starbucks debut?
I like the idea of Sonic Youth having a presence in mainstream places. It’s not an ambition or goal; it’s just so that people have access to us. You just have to fight the thought of bad politics: companies that might be involved with global economic conflict.

Were there any surprises when Sonic Youth began playing Daydream Nation live?
We were thinking of doing (1987’s) Sister or (1983’s) Confusion Is Sex live from beginning to end rather than Daydream Nation, then saying, “Oops.”

Is the acoustic sound of Trees Outside The Academy a reaction to Sonic Youth’s last album (2006’s Rather Ripped)?
I’ve been writing songs on acoustic guitar and dealing with new tunings. I kinda stuck to that, but with a bunch of musicians to accompany me to a certain degree. I didn’t want a typical band, so I asked Samara Lubelski (Tower Recordings) to play violin. And Christina Carter (Charalambides) is one of the most beautiful singers I’ve ever heard.

This is the first time I‘ve heard you sing with a woman that wasn’t (wife/SY bassist) Kim Gordon. Was that weird?
Well, it wasn’t as if I said I had to have a chick in the band. Christina has such a pure tone. Kim and I have done vocal things together, but Kim and I are not … pitch-friendly singers.

Are you still a member of the secret society Sons of Lee Marvin with Tom Waits, Jim Jarmusch and others?
Yes. We are still that secretest of societies. Even though I am in it, I do not know when they will choose to make contact. They never use electronic media to make said contact. It’s always sort-of missives that you’ll just happen to find slipped into your suitcase or under the door of your hotel. How they know where you are and what your itinerary might be is simply unbeknownst to me. Look, this is all I can tell you, because if I say more, I’ll have to kill you.