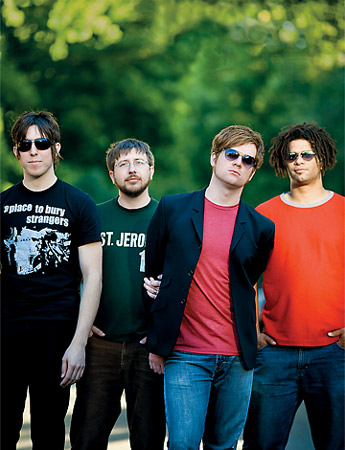 Of all of the underground movements of yore, the late-’80s/early-’90s shoegazer genre seems to have aged the best. Maybe it’s because the preeminent recordings of the time sound like nothing that had come before. Or maybe it’s because the sound was never embraced by the mainstream, thus avoiding widespread saturation or burnout. Perhaps this is why Airiel’s The Battle Of Sealand (Highwheel) feels simultaneously fresh while offering what seems like a gift bag of lost tracks by My Bloody Valentine, Ride and Pale Saints. Hailing from Chicago (via Bloomington, Ind.), Airiel has gradually astounded attentive listeners by issuing five EPs since 2003 and putting on a deafening live show.

“Our mentality is to be loud enough so that people pay attention,” says guitarist Chris DeBrizzio. “We pride ourselves on being the loudest band in Chicago. We’ve had the plug pulled on us several times and once played a show in which we were in one room and a dance DJ was in another room. We purposely made it so that no one in the building could hear the DJ.”

At 24, DeBrizzio is the youngest of these sonic architects; the remainder of Airiel is filled out by singer/guitarist Jeremy Wrenn, singer/bassist Cory Osborne and drummer John Rungger, all around the age of 30. A masterfully constructed album that doesn’t dilly-dally with long interludes of ambient noise (a common shoegazer crutch), The Battle Of Sealand quickly gets down to business with the propulsive, more rocking side of Airiel’s chosen genre. “Thrown Idols” is a blazing tribute to pre-Loveless MBV and early Chapterhouse, with the four-piece wailing away with heaps of distortion, pounding drums and an unforgettable hook. Conversely, “Thinktank” and “You Kids Should Know Better” are thick with the layers and effects that used to bankrupt labels with studio fees back in the day.

“If this album had been recorded in 1990, there’s no telling what it would have cost,” says DeBrizzio. “We got extremely lucky with that. We went in over a weekend and spent about a month mixing and mastering.”

A recent U.S. tour exposed Airiel to new audiences great and small. “The turnout in Omaha wasn’t that great, but things started to turn around once we played Denver,” says DeBrizzio. “In L.A., the line for a 600-capacity club was around the corner.” The hometown love for Airiel, however, is hot and cold, despite Chicago being a longtime indie-rock hotspot. “There aren’t a lot of shoegazer-y bands here,” says DeBrizzio. “And there’s a part of the Chicago scene that sees us as sort of a novelty, but our label and friends are here.”

Refusing to toil in retro new wave, post-punk or yawn-inducing folk rehashes is bound to cause a bit of misunderstanding. But when listeners finally do come around to the towering greatness of The Battle Of Sealand, it’s advised they make an earplug investment in the process.