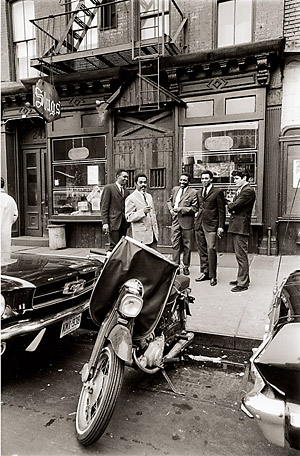 A haunting image of Albert Ayler appears throughout a new documentary that explores the free-jazz saxophonist’s too-short life and legacy. It’s a black-and-white film clip in which he’s standing shirtless, silent, staring into the camera, the white patch on his beard beaming like a headlight. It’s as if Ayler is saying to the audience, “I told you so.” Ever-confident during his brief and underappreciated career in the mid-to-late 1960s, he had this to say about his chaotic, spaced-out brand of jazz: “If people don’t like it now, they will.”

Filmmaker Kasper Collin was one person who liked the saxophonist’s music from the get-go. He first heard Ayler in the early 1990s, when he was 18 and living in his native Sweden. “It really stood out from everything else I was listening to,” says Collin. “It’s incredible, powerful music.”

When Collin moved to Stockholm in 1995, he discovered that Ayler lived there in the early ‘60s. Intrigued, Collin searched for more details on Ayler and found next to nothing. Working as a director, Collin turned sleuth as well. “I wanted more information about Ayler’s stay in Sweden,” he says. “I couldn’t find any written sources, so I tried to find out on my own.”

My Name Is Albert Ayler (also the title of the musician’s 1963 debut) is the result of nearly seven years of work. It’s a profound and inspiring film built around recordings of Ayler’s voice. Collin blends archival footage from Stockholm and New York, vibrant live footage and interviews with friends, family and musicians. Unlike many documentaries in which academics, critics and fans are solicited for their opinions, Collin chose only to use people who were close to Ayler.

Their stories are just a small part of the film, which humanizes the enigmatic musician whose body was found Nov. 25, 1970, in New York City’s East River. He was 34. (Mystery still surrounds his death: Police say it was suicide, while others insist foul play was involved.)

Collin’s original intent was to make a short film about Ayler’s year in Sweden, a glorious time when he met like-minded musicians such as Sonny Rollins, Cecil Taylor and Don Cherry. The more Collin dug, though, the more he found, such as the time Ayler invited himself onstage during a John Coltrane concert. At Coltrane’s request, Ayler was later asked to play at the legend’s funeral.

“There was a lot of detective work,” says Collin. “Finding the archival footage, the radio interviews, even still pictures. It was very difficult. But I got a lead here, a lead there. Suddenly, I found the people who had been connected to him. He left a very strong impression behind. That got me very fascinated about the human being Albert Ayler and who he could have been.”

After screening his short film, Collin received money from the Swedish Film Institute, which meant he could afford to travel to Ayler’s hometown of Cleveland. Ayler’s father, Edward, a spry 89-year-old, was eager to talk about the son he lost. One memorable scene shows the elder Ayler, cheap wreath in hand, struggling to find his son’s tombstone under a coating of leaves.

Collin also spent time with Donald Ayler, a trumpeter who never had the chops of his brother. The two played together in New York and Europe, though their relationship eventually disintegrated. Only later in the film are we told that Donald suffered from mental problems that led to a breakdown. While Donald looks content, there’s a sadness in his eyes that betrays his feelings of a lost life. (He died of a heart attack in October.)

Within a compact 79 minutes, Collin admirably captures a complex character whose music had the staying power he predicted. “It’s not a film with just one message,” says Collin. “I want people to see that he was a really great American artist who, at least in Europe, has been respected as a great artist. He was stubborn. His willpower and spirituality were unbelievable. It’s difficult to compare him with anyone today.”

One reply on “Kasper Collin: The Man Behind The New Albert Ayler Documentary”