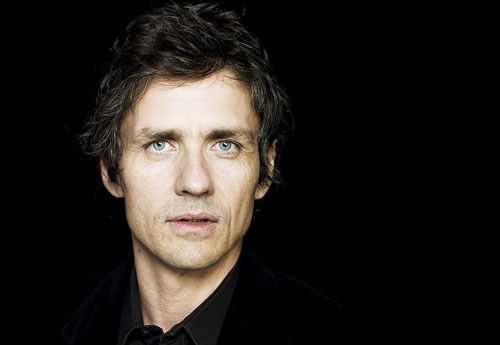 You revisit a lot of obviously painful material here: a bad band breakup, estranged fatherhood, divorce. Why not work this material out through music?
With certain topics, there’s only so much you can get across in the pop-song format. It’s the same with any discussion of, say, politics; the limits of the form prevent you from going into a lot of detail. That’s why a lot of politically motivated pop music is boring; you just can’t get that deep in three minutes. But I found that the main difference in writing lyrics and [writing Black Postcards] is that in lyrics, you can hide. You can come up with a clever line and hint at things that are happening in your life; maybe they’re about you or partly about you or about someone else. You can use poetic license and really don’t have to tell the truth. Writing this book, by contrast, was like going through a long therapy session.

Were you worried about opening that material up for public scrutiny?
I wasn’t really worried about the process until very recently. It gave me something to do, actually, as Luna had just broken up. And for better or for worse, memoir is becoming the dominant popular literary form. I could’ve written all of this as a novel, I suppose, or a thinly veiled fiction. In some ways, that would’ve made it a lot easier, since you’re not bound by considerations of libel or the threat of lawsuits. But I thought I wouldn’t buy a novel written by a guy like me. If I saw a novel by me on the shelves, I’d think, “Jesus, who does this guy think he is?”

But all of this writing about drug use, infidelity, band politics and other assorted bad behavior—it’s not just your story. It’s also (brother) Anthony’s and (ex-wife) Claudia’s and (son) Jack’s and (current bandmate and romantic partner) Britta Phillips’.
It’s a very delicate balancing act. There were people who were very concerned about what I was going to put into the book. Claudia and Anthony, in particular, expressed a great deal of worry. Claudia was most concerned with what I was going to say in the part of the book that dealt with our time in counseling and therapy. That’s why it was a lot like therapy and why it was painful at times. Writing about my divorce or seeing my son being wheeled off by a babysitter as I stood on the street … it all comes back, and it’s all very painful to relive. Though it’s probably healthy as well; I can now read those sections without getting upset all over again. So I tried to be as fair as possible. And I do think, ultimately, I’m harder on myself than I am on anyone else in the book.

It does seem to come back to a pretty rigorous self-examination each time.
It’s a common hazard. If you talk to anyone who’s written a book, whether nonfiction or fiction, you find that there’s always material that’s going to upset someone; someone’s always worried. But you get to the point where you think, “If I take out everything that might offend or bother someone, this isn’t going to be a very interesting story.” It’s a legal issue, too. I went over the book with a lawyer for three or four hours. He kept asking, “OK, here on page X, where you mention this person taking drugs, can you prove that?” Or committing adultery or whatever … Even if it’s true, you can be sued. And I realized that people who write fiction can come closer to the filthy truth than people who write nonfiction, because they don’t have to worry about libel. I don’t think I’m mean—well, occasionally I’m mean in small ways, I suppose. But I don’t think I’m mean to the people who are close to me.

That would bring us to the first third or so of the book, which is all about Galaxie 500. Were you worried about going back there?
I didn’t really intend to revisit a lot of the history of Galaxie 500, but then someone pointed me to Damon & Naomi’s website, on which they’ve posted an interview from 1997. In that interview, Damon offers what he calls “the dirty facts” about the breakup of the band. I can understand them saying things about me like they do in that interview. I’ve done it myself. You talk to journalists and you’re in a certain mood, and then it’s out there. But they’ve put this thing up on their website as their official version of what went down, and I felt like I was compelled to respond to it. There’ll be some things they don’t like, I guess, but again, I feel like I’ve tried to present my version of that history in a balanced way.

There are lots of poor Galaxie 500 fans who, for whatever reason, still haven’t gotten over it.
Ah, sure, there’ll be some fans who’ll be shocked by my bad behavior. “What? How could he? That’s the guy who sang about the snoooowstooooorm.” [Laughs] But in a bigger sense, I think that section of the book is about losing your innocence. You start out as friends, and you love each other. But the moment you make a record, you’re now in business together. You keep making records, and eventually it’s almost like you’re married to each other. You never planned on being married, but now you’re deeply involved in each other’s lives. It happens in every single band. A band becomes a bureaucracy, with a manager and an agent and a lawyer and a lot of people around you, and a bureaucracy has its own needs. Certain bands do get to a point where they find they all despise each other. Some go into therapy and come out the other side. R.E.M. and Metallica went into therapy, for example, but they had a very good reason to do so. They were making tens of millions of dollars, so they looked at things and thought, “We’d better fix this problem.” For me, it was easier just to walk away.

One of the things I like about the book is that you clearly offer some observations on how young musicians might get screwed—and you go into detail about some unscrupulous characters—but in the end, you offer absolutely no advice.
That’s true. People sometimes ask if I have any advice for young musicians, but I really don’t. I’m still figuring it out myself. I do think it’s funny that people continue to think that major labels are invariably evil and indie labels are always the good guys. In my experience, I’ve seen just as many people get ripped off by the indies as the majors.

Drugs and sex on the road—your sections on Britta and Lara (Gray, touring keyboardist for Luna circa 2004) can be read as something of a cautionary tale for women in the indie-rock scene.
Well, I don’t know that that sort of phenomenon is locatable in the indie-rock scene. You just get thrown together in a very intense way. Me and Britta, there we were singing together, and it’s all very romantic and intoxicating. You start thinking, “Is it possible to be in a rock ’n’ roll band and remain faithful to a girlfriend at home?” It’s difficult. Say what you want, but you’re exposed to temptation that other people probably are not. Or maybe other people are stronger than me. I think I mention in the book that my born-again-Christian friend Graham says that once you let the devil into your life, it’s hard to get him out. I don’t believe in the devil, but the metaphor works. There are bands who start looking around for cocaine after the show, because you’re bored from riding around in vans all day. Once you do that a few times, the idea pops into your head every night. It’s the same with sex on the road. Or it can be.