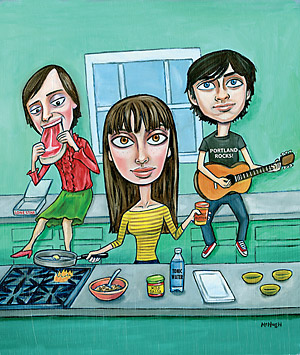 In the nightmare from which there is no waking—or, as you may know it, life—there will be a giant music festival. Only there won’t be any bands or singers there. It will be a music festival devoted entirely to dweebs who excel at Guitar Hero or Rock Band: video games that allow you to realize, virtually speaking, your fantasy of being a rock star. This is not a guess.

Toward the end of 2007, an ad appeared for a concert featuring Gibby Haynes and a bunch of teenagers from the Paul Green School of Rock “playing the music of the Butthole Surfers.” This would be like Michael Jordan—no, wait, that’s wrong; it’s Gibby Haynes here, so we’re talking more like Sedale Threatt—getting paid to come out and play guard for the local high-school basketball team. There are already what amount to rock ’n’ roll fantasy camps. Saggy old middle-age nerds get to put on ripped jeans and play power chords next to washed-up frontmen and drummers. It would be funny if it weren’t so freaking depressing.

Just as Madden NFL and Tiger Woods PGA Tour allow sloppy-fat dopes to “compete” from the comfort of their sofas like actual athletes, these video games let soulless, tone-deaf lardasses pose like Eddie Van Halen and Ritchie Blackmore in the middle of some wankerrific solo. Rock Band even allows for the mystifying phenomenon of people who want to pretend to play bass. WTF?! Even real bass players don’t want to play bass.

Here’s a quick look back at 2008, the year that’s spreading all over you like a stain.

JANUARY
Robert Pollard announces he’ll release every record he’s ever been associated with on vinyl. According to the plan, subscribers will receive one album each day of 2008. To make the series affordable to Guided By Voices fanatics, Pollard offers financing at subprime mortgage rates.

FEBRUARY
It’s an eventful night at the Grammy Awards for Amy Winehouse. She wins four Grammys in all, two of them posthumously.

MARCH
Leslie Feist sells out. After building a loyal fan base through her dancing-in-an-iPod spots on national TV, Feist betrays those very fans by allowing her music to be played on the radio. After hearing the Canadian chanteuse sing for free, confused Feist fans have no idea what they’re supposed to buy.

APRIL
A new documentary and three different books explore the artistic genius of Freddie Mercury, proving once and for all that if you stay dead long enough, people will start to take you seriously.

MAY
On the debut of her show on The Food Network, Cat Power’s Chan Marshall demonstrates five meals you can create with leftover fried rice, chunky peanut butter, tonic water and half a jar of mild salsa. Tune in next week for “Sleeping Through Dinner Parties While Guests Try To Text You From The Porch.”

Scandal rocks the guys of Of Montreal. Despite parking their tour van “Outback,” they’re photographed dining at a Lone Star Steakhouse near Tampa, Fla. A spokesman for Outback cites the exclusivity contract its jingle writers signed: “No rights, just rules.”

JULY
Less than a year after Radiohead’s groundbreaking digital release of In Rainbows, Coldplay goes its U.K. rival one better. When you click on coldplay.com, the band’s new Virtual Hostages begins streaming on your computer and won’t stop until you agree to pay at least $50.

AUGUST
While in Beijing for the Summer Olympics, the endlessly surprising Bob Dylan thrills the host nation by performing an entire set of his best-known songs in Mandarin. Well, it might’ve been Mandarin.

The New England Patriots start the season 7-0, sweep the Boston Red Sox to become the first NFL team to win the World Series and occupy the Central American nation of Belize, where coach Bill Belichick declares himself Supreme Leader/Defensive Coordinator.

NOVEMBER
After playing winning gigs in Louisville, Ky., and Baltimore, Band Of Horses doesn’t make the third leg of its tour thanks to a broken van axle on the drive north to Elmont, N.Y. None of the band members is hurt, but the van has to be humanely destroyed.

DECEMBER
In a gesture meant to be purely ceremonial, George W. Bush resigns as president so that Dick Cheney can technically be recorded by posterity as our 44th president. Deeply moved, Cheney barricades himself in the Oval Office, invalidates the results of the November election by executive fiat, unleashes a nuclear assault on Russia, Iran and North Korea, then orders the invasion of Poland and France. In a live address to the nation, Cheney declares, “You will all worship Dick!”

On an upbeat note, Cheney’s live address can’t compete for ratings points with another successful season finale of Dancing With The Stars.