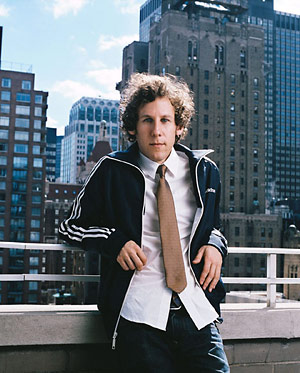 Being a whiz kid has its privileges. For Ben Lee, success came early and easily, first as the 14-year-old frontman for Australian pop/punk band Noise Addict (whose fans and patrons included Sonic Youth’s Thurston Moore and the Beastie Boys’ Mike D), then as a relatively wizened teenage solo artist. Lee did some acting, dated Claire Danes (the nearly six-year relationship ended in 2003) and dabbled in a variety of side projects, which ranged from a Kylie Minogue duet to songwriting for Evan Dando to a one-off band called the Bens with namesakes Folds and Kweller. But when it comes to his own music, Lee wasn’t satisfied with being the acoustic-guitar ingenue.

“My career could’ve been an easier ride if I’d just done what was expected of me,” says the 29-year-old Lee. “Once you get your foot in the door of the music industry, you’ve got the opportunity to play nice and do the same record 50 times in a row and just keep building that same fan base and not challenge yourself or anyone. For me, though, those were never the artists I responded to. I love Jonathan Richman and Bob Dylan and David Bowie, and change was part of it. The other night, this girl came up to me and, dead-earnest, said, ‘You need to make an acoustic record, just you and a guitar.’ I started giggling—I didn’t mean to offend her—and said, ‘I’ve already done that.’ It’s not my job to placate other people’s need for security because they can’t handle the chaos of the universe.”

Case in point is Lee’s latest album, Ripe (New West), which makes no bid for indie cred and rarely sets foot in the singer/songwriter ghetto. It’s a radio-ready album containing a lovey-dovey duet with starlet Mandy Moore (“Birds And Bees”), a power-pop ode to celebrity worship (“What Would Jay-Z Do?”) and a shamelessly Bon Jovi-esque stadium-rock anthem (“Sex Without Love”). Listen closer, however, and Ripe also offers the smartly self-referential “Numb” and short-attention-span critique “American Television.”

“The backbone of writing pop music is it’s better to be underestimated,” says Lee. “It’s much better if people go to you for entertainment and a catchy song and you can subvert their experience by giving them something meaningful when they’re not expecting it. I look at Conor Oberst, and he’s got this intense New York Times criticism every time he makes a move. That is not my idea of fun. Light, joyful pop music is not less meaningful to me than somebody wallowing in their misery. That’s a misconception about art.”

Lee insists that Ripe isn’t a total break from his past; the album was inspired by the radio hits he heard while growing up in the ’80s.

“The radio is still a genuinely exciting medium,” he says. “You’re out of control when listening to it. I mean, iPods are fun, but you’re choosing the musical experience you’re gonna have. I like the idea that music is affecting you in your everyday life in a way you have to surrender to.”