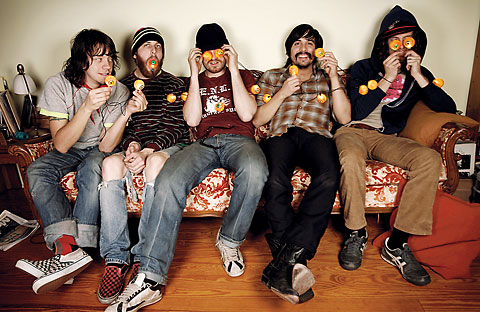 It can be lots of fun being in the culture-vulture industry. People you don’t know give you albums you didn’t ask for, sometimes you get into shows for free, and so on. But on very rare occasions, you also get in on the ground floor and watch as a swell band cracks a level of exposure it’s deserved for a while. So let us now praise Man Man, a motley cadre that has landed, after two albums which received limited release, on Anti- Records, home to such career cranks as Tom Waits, Merle Haggard and Eddie Izzard. Rabbit Habits, the band’s third full-length, coheres into something like a consistent aesthetic: Surrealist lyrics are wedded to instrumentation both historical (horns, marimbas) and semi-modern (electric keyboards, improvisatory percussion), and the whole thing’s whipped into lurching street-parade tempos or mournful, plaintive groans. Man Man’s music is fashioned quite literally from every damned thing at hand; the impeccably mastered Rabbit Habits, in its feral way the tightest of the band’s albums, sounds like the noisy work of a single organism thrumming and wailing on all the instruments in the studio at once. The same goes for the band’s unashamedly enthusiastic live shows, which can make you feel like your spine has been shot full of Freon. Granted, you either enjoy that sort of thing or you don’t, but if you do, Man Man’s your meat.

When people ask me what Man Man sounds like, I tell them it’s equal parts Residents, Salvation Army Band and Howlin’ Wolf.
[Long pause] I actually sort of like that. I always hold my breath when people venture into how to describe the band. Usually I ask them what they listen to, and tell them it sounds like that. Really, my influences are less musical than they are cinematic. The band was formed, in my mind, to make a musical version of [Alejandro Jodorowsky’s surrealist film] Holy Mountain. I think it’s pop music, honestly—just pop music. I still have this goal in my head of wanting to write the perfect, three-minute pop song, but obviously my vision is completely skewed, so I don’t know what I’m talking about. I’m still trying to learn how to write a song.

The music frequently gets described in terms of its supposed weirdness, but it doesn’t sound all that odd to me. It does sound like it spans a lot of time, like it could have been recorded in 2008 or 1908.
Thanks for that, that’s great. Banjos and marimbas and horns are part of pop-music history, too. You hear that marimba in “The Ballad Of Butter Beans?” Isn’t that an amazing part?

I also think this is the first time I’ve heard the word “dilsnick” on a record in about a decade.
I’m into that GangStarr thing.

But does the emphasis on the so-called weirdness irk you?
You know, a good song doesn’t have to be complicated, even a perfect song. You listen to James Brown’s “Please Please Please,” and there’s not that much going on. But at the same time, of course, everything’s going on. The perfect song can be one chord, as long as it makes an impact and you can feel it. We tried to explore new sounds on this record; we didn’t want to hear more of the “pirate-carnival” bullshit descriptions. I mean, if that’s what gets people into the music, and then they listen more deeply, that’s fine. I like pirates, and carnivals are OK and creepy. It’d be worse to be called a dickhead or something. What’s really frustrating, actually, is being written off as a jokey, gimmicky band. We do have a sense of humor, which is an approach that’s healthier, I think, than being completely serious about it. But I like being able to bury sad songs in a happy environment. It’s sneakier. Like the title song on Rabbit Habits—that’s a pretty sad song, but it’s wrapped in this upbeat, wistful sort of piano line. So there is an established aesthetic. It’s obvious I still haven’t taken any voice lessons, for instance. Still, we’ve gone pretty far away from where we started. I couldn’t direct you to a taco stand at this point.

Anti- seems like a fitting label for the band, given their roster. How’d that come about?
They came to us, actually. There are a lot of idiosyncratic artists there; it’s a good family to be a part of. I think it was the live shows that sealed the deal. Our distribution wasn’t so good for the first few years. We went on tour with Modest Mouse and the kids got really excited. We built fans, but we weren’t moving records. I thought after all that touring that people would be psyched to hear we weren’t on a label anymore, but we ended up using all the money we made from touring to record the first part of the album in Chicago, in this studio six flights up in an old warehouse. Freezing cold, this really bad part of town. Our spare tire got stolen off of the van in the middle of a snowstorm the one night we parked it on the street. We recorded until we ran out of money, and then we went on tour again. Then we spent that money recording the next part, then we went on tour again, and so on. Did I mention Chicago was cold?

And six flights up. Ouch.
Yeah. I woke up this morning and saw a little hobgoblin scurry out of the room. Turns out it was my metabolism. If I’d been staying in a better hotel I’m pretty sure the doorman would’ve stopped him.