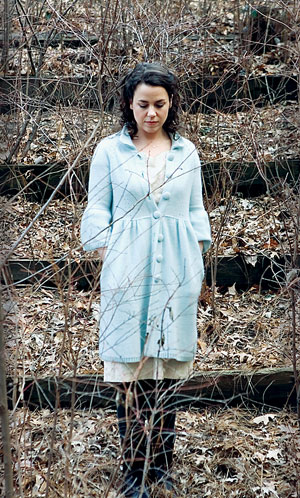 Petra Haden is a member of one of America’s most prolific musical families: Father Charlie is a jazz bassist who played with Ornette Coleman, brother Josh fronts slowcore outfit Spain, and sister Rachel is in pop act the Rentals. Although Petra is best known as a violinist (for the Decemberists, that dog and others), she’s currently in a singing mood. Having released an a cappella version of The Who Sell Out in 2005, she’s now working on an album of a cappella film themes, tentatively titled Petra At The Movies.

JO STAFFORD “He’s Gone Away” (1959)
My dad introduced this song to me a few years ago, and the melody still haunts me. It’s a traditional song, but Jo Stafford sings my favorite version. She’s a legendary singer; she did jazz and standards. My dad plays mainly classical music for me, but this is kind of like a lullaby.

CHEAP TRICK “Surrender” (1978)
Simply the greatest rock song of all time. This is not an overstatement. It has the exact ingredients of a perfect rock song. It’s in the (1979) movie Over The Edge, which was one of my favorite movies when I was a kid. It’s a movie about suburban kids who trap their teachers in the school and blow up cars and stuff. I think my brother rented it on VHS, and he was also really into Cheap Trick at the time.

AARON COPLAND “Hoe-Down” (1942)
Damn. I think this song was co-written by God. If you go to iTunes and just listen to a snippet, you’ll hear what I mean. Sometimes I listen to the classical-music station before I go to sleep. But when this piece (from the Rodeo ballet score) comes on, it’s not a song to listen to quietly. Maybe that’s why I have trouble sleeping.

COCTEAU TWINS “Blue Bell Knoll” (1988)
Elizabeth Fraser is my favorite singer. I used to practice singing to the Cocteau Twins’ records, and she covered such a wide vocal range: really low and really high. Even music that I hear today, I hear how bands and artists are influenced by her. She sort of sang in gibberish; sometimes I could make out a couple words here and there, but it gave everything such an aura of mystery.

NINA SIMONE “I Love You Porgy” (1962)
This is from George Gershwin’s Porgy And Bess, and the version I love is sung by Nina Simone. Her voice is very deep and really different. When I hear it, I end up crying. I’ve sung it live a couple times, and I don’t actually get tears, but I feel a lump in my throat.

JOHN WILLIAMS “Superman Theme” (1978)
I’m in the middle of recording an a cappella record of movie themes; this is one of them. I’ve been obsessed with Superman since I was little. I think I’ve recorded every part in the song: the strings, the horns, the percussion.

GNARLS BARKLEY “Crazy” (2006)
Even though this song was played so much on the radio when it came out a couple years ago, it could never be overplayed for me. I started dancing the very first time I heard it—and I never dance.

PAT METHENY & LYLE MAYS “It’s For You” (1980)
Pat Metheny is my favorite guitarist, and I think he’s a genius. When I was in high school, I would sit in my room and listen to this song over and over again until I learned to play his guitar solo on my mandolin. I don’t play guitar; the mandolin is tuned just like a violin, so I could make out what he was playing. Everything I love about music is in this song. It’s a long song with a lot of parts to it, and it’s like an adventure.

VINCE GUARALDI “Linus And Lucy” (1965)
I get excited every time I hear it. It starts out playful, then all of a sudden it gets dramatic. Even though it represents so much of our childhood, it’s a brilliant jazz tune.

MICHAEL JACKSON “Don’t Stop ’Til You Get Enough” (1979)
I heard this song for the first time when I was 11 at summer camp. The camp was called Laurel Springs, in Santa Barbara, and Jane Fonda owned it. It focused on music and drama, and I remember every Tuesday she would do workouts with the kids. I still remember thinking, “This is not my forte.” There was a dance on the last day of camp, and I remember not wanting to dance, but this song came on and everyone went crazy. So I started dancing, too. I couldn’t help myself.

One reply on “Petra Haden Makes MAGNET A Mix Tape”

This is great because it is diverse and has some standards through out the decades. I do miss and want the ability to listen to the songs…