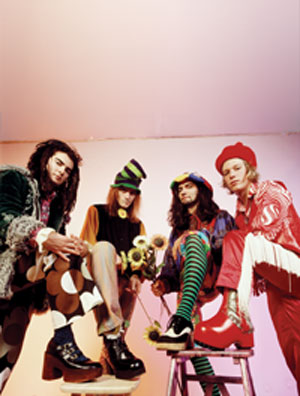 For a brief spell in the early ’90s, Jellyfish was more than happy to play grunge spoiler. That much was obvious from the campy, funereal organ that kicks off Bellybutton, the San Francisco band’s effusively melodic 1990 debut.

“We went to a church in L.A. that had a massive cathedral organ and recorded it right there,” says Jellyfish keyboardist and cofounder Roger Joseph Manning Jr. “Jellyfish was actually the most punk-rock statement I ever made. We were always outsiders, musically. But unlike the sort of music geeks who would’ve gotten into jazz, we really loved classic pop.”

1993’s Spilt Milk, the band’s second and final album, is a blustery, meticulous tribute to the hook-crazed nostalgia of ’70s fandom, mining inspiration from the Beatles, the Beach Boys and Queen with a theatrical flamboyance that bordered on parody at times. While Spilt Milk confirmed Jellyfish’s immortality in the eyes of power-pop fetishists, it failed to capitalize on Bellybutton’s modest commercial success. That was enough to send band members scrambling for the exits.

“We made no money with the first album, and financial pressure was looming over us,” says Manning of the issues leading up to Jellyfish’s 1994 dissolution. Compounding the monetary woes was singer/drummer Andy Sturmer’s autocratic hold on the group. “Now I can look back on it and see that without wisdom, maturity and maybe some counseling and therapy, we could’ve never worked through our problems,” says Manning. “Had there been more money coming in, it would’ve justified some of the pain.”

Original guitarist Jason Falkner was the first to bolt, leaving prior to Spilt Milk and eventually forming the Grays with budding “it” producer Jon Brion (who contributed guitar to Spilt Milk) before moving on to a solo career. “I just kind of evaporated,” says Falkner with a giggle. “I was told that Jellyfish would be an equal three-piece, with us writing and playing everything. That turned out to be a total joke. I felt like I was duped.”

Notoriously press shy, Sturmer has opted for a low-key post-Jellyfish job as a TV theme-song composer for cartoons such as Transformers and Batman. He also serves as a writer/producer for obscure and overseas acts, including Japanese pop phenoms Puffy AmiYumi.

“Andy never wanted to be in the spotlight, but he was never honest with himself,” says Manning of Sturmer’s vanishing act. “With Jellyfish, he couldn’t have been in more foreign territory.”

Manning and Falkner have each released solo albums in Japan and recorded and/or toured with a lengthy and diverse list of artists, including Beck and Air. As for the likelihood of a Jellyfish reunion, Manning isn’t optimistic.

“Except for Andy, we all speak to one another,” he says. “Some of us make music together (Falkner and Manning are collaborating as TV Eyes). But nobody is interested in working with Andy in a personal or creative capacity. It would serve no purpose, but I don’t say that with any animosity or sadness.”

5 replies on “Jellyfish: The Men They Used To Be”

Well I for one am still waiting for another album. The two albums Belly Button and Spilt Milk were Pure Genius! I still play them all the time because they’ve got great lyrics, harmony, hooks, instrumentation, production, ….. yada. On On

It’s been 23 years since I moved to San Francisco, and I still miss Jellyfish. I spent the past week out of state and listened to the Live At Bogarts recording probably six times in fewer days than that. Whether there are personal issues with Andy Sturmer or not, it’s hard to miss the fact that the group at least sounded cohesive, and was a very bright spot in the early 90’s – especially in San Francisco which was a bit bleak at the time. I think Workman was with Rundgren back then – either just before or just after Jellyfish. Faulkner was great. Hell, they were all great. Wish it had worked out.

Roger definitely left his mark on Jellyfish! It is no wonder that they broke up.j/k. I suppose egos and insecurities settled in, too much, though in fairness I really don’t know.