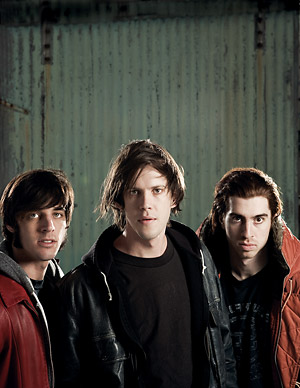 With big guitars and hard-hitting drums, the Southern-bred road warriors in the Whigs are on a mission to restore the rock trio to ragged glory. By Steve Klinge

“The phone was actually on my body and I didn’t hear it. That’s how asleep I was. It’s rather embarrassing.” Parker Gispert, the 25-year-old songwriter, vocalist and guitarist of Athens, Ga., trio the Whigs, is apologizing for missing several calls for a scheduled interview. Drummer Julian Dorio finally had to wake him in the back of the tour van.

Although it’s early afternoon, Gispert can be forgiven for his exhaustion. He’s somewhere between Cleveland and Chicago, in the middle of a tour that has the Whigs criss-crossing the Midwest. The buzz for the band’s second album, Mission Control (ATO), is growing quickly, adding to the whirlwind. A few weeks ago, they played Letterman; the following week, they’ll do Conan. The New York Times gave Mission Control a glowing review, and last year Esquire named Dorio “best drummer” in its annual Esky Music Awards.

All this for a trio whose songs sound like a brash blend of terse Who mod rock, frayed Nirvana grunge and drawling Kings Of Leon stomps. While the Whigs play music in an unabashed, fearless way that isn’t exactly fashionable at the moment, Mission Control proves that a great riff, a frenetic pace and a lot of volume can still thrill.

“We’re kind of in this indie-rock age coming out of shoegaze land and twee land,” says Gispert. “There was definitely an effort to do something different [on the album]. We’re a rock band. It’s guitar, bass and drums; it’s loud, and we play hard every night. We’re proud we’re a rock band. But we understand that rock is probably the least popular it has been in as long as I can remember.”

Certainly, the Whigs have less in common with their hometown’s fabled college-rock tradition (R.E.M.’s arty jangle, the B-52’s party jams, the Elephant 6’s ornate pop constructions) than with the hyperventilating rush of the Hives or the classic-rock climax of a My Morning Jacket guitar jam. Mission Control isn’t going to save rock ‘n’ roll, but the Whigs would never claim that’s what they set out to do. They just want to work hard at rocking hard.

Gispert and Dorio met as students at Westminster, a tony Christian day school in Atlanta. Dorio, who was a grade ahead of Gispert, had a reputation for being a talented drummer, although he wasn’t in any bands of note. The two were friendly but didn’t start playing together until the summer of 2002, after Dorio finished his first year as a psychology major at the University of Georgia in Athens. Gispert was slated to attend UGA in the fall, but he was sidelined with mono, hepatitis and liver problems and deferred his admission. He spent the time woodshedding—practicing, writing songs—and waiting tables in a barbecue restaurant. Soon Dorio began heading back to Atlanta on weekends to rehearse in Gispert’s parents’ basement.

“It’s weird to look back on it, because I couldn’t imagine doing this right now,” says Dorio. “But almost every weekend would come, and although it was college and it was time to go out and party, I would drive to Atlanta and play. It seemed normal at the time.”

After Gispert moved to Athens, fellow UGA student Hank Sullivant joined them, and the Whigs were born. “I like what a trio forces you to do,” says Gispert. “It doesn’t let anybody just sit there and play something someone else is playing. Everyone has to have an integral contribution to the song. I can be more strummy and provide a lot of the body, and the bass ends up having to provide a lot of the melody, which I really like as opposed to just having the bass back there playing roots or just holding down the low end. It also leaves Julian a lot of space to play drums.”

The Whigs soon started gigging around Athens, making the 300-capacity Tasty World, a former Frigidaire appliance showroom, their unofficial home venue. Athens still has a fertile music scene, and the sheer number of local bands can make for fierce competition.

“When they first started, the audience was all their friends, which is what a club like ours can hope for,” says Murphy Wolford, Tasty World’s owner and booking agent. “But whereas with other bands, their friends all graduate from college and they dissolve, the Whigs captured their own fans. As their friends graduated, they replaced them with new Whigs fans. That doesn’t happen very often.”

In 2005, the Whigs self-released their debut album, Give ‘Em All A Big Fat Lip, selling it locally, at shows and on their website. They recorded it in the Gispert family basement, purchasing studio gear on eBay and selling it back, sometimes at a profit, after finishing Big Fat Lip.

“If you buy older, vintage stuff that there’s not a lot of on eBay and 25 people bid on it, the 24 people who didn’t get it are going to want it two months later,” says Gispert. “We used the stuff, made the record, then when we were done, we put it right back on eBay … It was appropriate; we didn’t have any money, and it seemed like a really logical idea to us. You can have your dream recording studio, then have it in your bedroom for three months.”

Big Fat Lip is much tamer than follow-up Mission Control. With wordy, fuzzed-out pop songs and raspy ballads, the debut garnered comparisons to the Replacements and Archers Of Loaf, two bands Gispert hadn’t heard at the time but has since grown to love. It also caught the ear of several labels, including Dave Matthews’ ATO imprint, which re-released the Whigs’ debut in 2006.

“We couldn’t really expect someone to drop their life to be writing bass lines for six hours a day and practicing for a tour another three hours a day,” says Gispert. “It was our method in order to keep working at the pace we were comfortable with.”

The Whigs could rely on ATO rather than eBay for their second album, so they headed to Hollywood to record with Rob Schnapf, who’s worked with Beck, Elliott Smith and Guided By Voices. But it’s Schnapf’s productions with another Southern power trio, Birmingham, Ala.’s Verbena—as well as with Swedish garage rockers the Hives—that bear the most similarity to the Whigs’ Mission Control. Schnapf and engineer Doug Boehm coaxed a huge, snarling sound out of the trio.

“One of the exciting things about recording with Rob and Doug was that we were going to be able to have the three-piece stand on its own legs, like we play every night,” says Gispert. “It occurred to us that we were going to make a rock record, so let’s have it be loud, because we’re loud when we play in a club. I wanted to challenge some (listeners) to say, ‘All right, let’s turn this thing down—it’s too loud.’ We didn’t have that opportunity with the first record. We had to do different things to create fullness.”

“Sonically, the difference is night and day,” says Dorio. “We play real hard and loud live. It’s always been that way, that high-energy thing. We wanted this record to display that much better.”

Aside from some Southern R&B horns on rough-and-tumble power popper “I Got Ideas,” the strum and drang of the title track and a judicious pedal steel on the softly chiming “Sleep Sunshine,” Mission Control includes few overdubs. It’s the sound of a trio, amped up and undeniable. Whenever the Whigs considered the conventional move of adding another guitar or organ, they rejected the idea.

“With a trio, there’s just enough room to get all of us in there rockin’ pretty hard at equal volume,” says Dorio. “That I really like. In no way am I comparing us to Nirvana, but if you listen to Nevermind, everything is loud. It’s just amazing. You can do that when you have just a few instruments. There’s no clutter.”

If the Whigs felt pressure from expectation, it doesn’t come through in the music. Gispert’s lyrics, however, betray both eagerness for success and skepticism at the process. Mission Control opens with a machine-gun volley of guitar and drums and the line, “Like a vibration, my reputation is hanging around my neck, it’s hanging out in bars.” On “Right Hand On My Heart,” Gispert drawls, “We’ve got your money, now let’s make a new start,” while the jangly, easy-rolling “I Never Want To Go Home” is an ode to the joys of life on the road.

As a child, Gispert aspired to play on late-night TV and compiled videotapes of band performances. (Those collecting days are done: The day after the Whigs were on Letterman, a clip of their performance was posted on the Internet, of course.) But Gispert finds the effect of the TV appearances amusing.

“It’s so funny the difference that it makes,” he says. “People who saw you on Letterman and come to the shows, they look at you differently. It legitimizes you in a way if they saw you on television.”

Dorio views his Esquire accolade with similar bemusement. He can’t help but laugh when asked about his “best drummer” award. “In no way do I think I deserve that title,” says Dorio. “I don’t laugh at it in a dismissive way or look down at anyone who says something nice. We got a huge kick out of it. We have friends in bands who are amazing musicians, and I’m not the best drummer. That’s crazy. I’m not sure how it really came about. What I heard is that [Esquire writers] just came to shows. I guess that’s the way I’d want it to be, for them to enjoy it and be impressed. I mean, the drummer’s job is to accompany the song in the best possible way. I don’t want to be in the way or upstage anything or get in the way of the song.”

Gispert, not surprisingly, can see the rationale behind the acclaim garnered by Dorio. “Julian is definitely the best musician I’ve ever played with,” he says. “He just has a clock in his brain that most drummers don’t have. It’s not like he’s (Rush’s) Neil Peart or doing anything insane back there. He’s not a flashy drummer, which is another thing that he should be commended for. His favorite drummers are the Ringos and the Charlie Wattses, people who understand that the best thing they can do as a drummer is to be playing parts that really add to the song as opposed to playing some wicked beat that you’ve never heard, but who cares because it makes the song suck.”

Despite the Whigs’ growing profile and increasing tour obligations, Gispert is keeping his apartment in Athens, although he doesn’t plan to be there much. The band, which now includes bassist Tim Deaux, plans to spend most of the year on the road. “I never want to go home,” indeed.

At this moment, at least, it looks like the Whigs’ hard work is paying dividends, resulting in high-profile festival dates in the U.S. and Europe this summer. Not that the band is reveling in success. Yet.

“It’s tough to say we work hard, because it’s a pleasure and a privilege to do what we do,” says Dorio. “I never want to say, ‘We worked hard, therefore we deserve this.’ We work just as hard now as we did from day one. You earn yourselves certain opportunities. Obviously, we weren’t on the road all the time when we started; being on the road is exhausting. But that was a goal, to be exhausted like that. If I’m not busy, I’d get concerned. Accomplishments are great, but they last about 10 seconds. Then we’re looking to the next thing.”