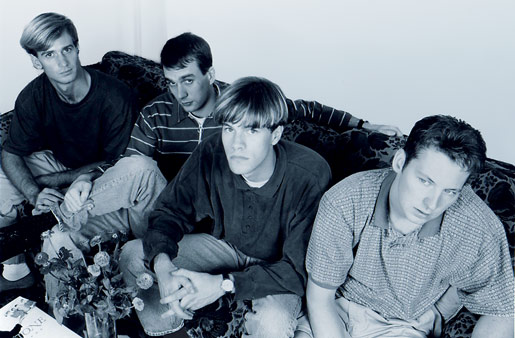 If Echo & The Bunnymen were the template for early-’80s modern rock—from Ian McCulloch’s gravity-defying hairdo to the Liverpool band’s omnipresent trenchcoats and rainy-day outlook—then the Ocean Blue brought up the tail end of that decade in similarly iconic fashion. When it was signed by Sire Records boss Seymour Stein (the man who gave the world the Ramones and Blondie and introduced American ears to the Smiths), the Hershey, Pa., quartet was still months removed from high-school graduation, playing local gigs with neighbors such as the Innocence Mission and Live. With jingle-jangle guitars and lyrics that found inspiration at the feet of various poets, painters and paupers, the Ocean Blue’s 1989 debut convinced most listeners they were hearing a band of British upstarts rather than a group of teenagers from the relative hinterlands of Chocolatetown, USA. That The Ocean Blue was recorded in London with Smiths producer John Porter further blurred the quartet’s provenance. (The band members returned to the U.S. after canceling their tickets for Pan Am’s ill-fated Flight 103, which exploded over Lockerbie, Scotland.) The propulsive, Bunnymen-like “Between Something And Nothing” and sax-driven Haircut 100-alike “Drifting, Falling” made the Ocean Blue instant darlings of the college-radio and MTV 120 Minutes crowd, driving sales of more than 150,000 copies. Later records such as 1993’s Beneath The Rhythm And Sound may have perfected the formula introduced on this debut, but the Ocean Blue would never again hit on all creative cylinders. [www.theoceanblue.com]