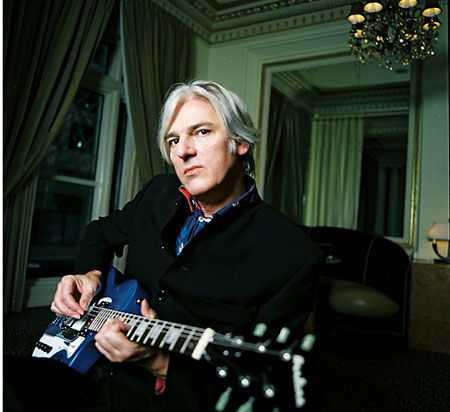 Having a conversation with Robyn Hitchcock is like tripping through the back of your eyelids or talking to the mouse who lives inside Bob Dylan’s hat. It is a sip from the creative fountainhead. We here at MAGNET dial Hitchcock’s rotary imagination as often as possible.

We spoke to Hitchcock about Luminous Groove (Yep Roc), the recent five-disc boxed set collecting three of his albums with backing band the Egyptians (1985’s Fegmania! and Gotta Let This Hen Out!, along with 1986’s Element Of Light) as well as rarities and unreleased tracks. Hitchcock is currently touring the U.S., performing the entirety of his 1984 classic (we mean it is seriously classic) I Often Dream Of Trains. Q&A after the jump.

Before I ask you about Luminous Groove and such, what are you up to that’s new?
I build on my own creations. Each record is a new strata and helps create compost for the next. Progress is a spiral, covering familiar ground but from a new altitude. The galaxy itself is a spiral from certain points of view. Not that I’m galactic. Currently we are finishing two records with the Venus 3, Propeller Time from 2006 and Goodnight Oslo from 2007. The plan is to release one album in Europe and one in the U.S. Propeller Time contains the first song to feature both Peter Buck and Johnny Marr together, a song Johnny wrote the tune for called “Ordinary Millionaire.” Andy Partridge and I are also writing songs together, sometimes in his shed, sometimes in my front room. We are slowly recording them. Hopefully something will emerge next year.

So why are you now having at your past, the box sets and such? Are you looking for inspiration or just something to do that you once liked to do?
Those records have been out of print for five years or more. My life is my work, and I want to see as much of it out there as possible while records still exist in physical form. This is probably the last time around for their physical re-release, perhaps also for them to be sold as “records.” I’ve had them released on vinyl, as that is more likely than CDs to outlast this era, the Smoke Age, that we are so painfully trying to leave. In years to come, archaeologists or space travelers could spin an LP around their pinky (or its future alien equivalent), stick a pin into the grooves and hear a tiny voice singing, possibly backwards, like the fly at the end of the movie The Fly: “Helllp meeee.” They’ll probably think CDs are a form of garbage, like plastic chairs. Or trash vertebrae.

I remember that you sort of semi-retired before you recorded I Often Dream Of Trains in 1984. Do you remember why you dropped out and why you dropped back in? How did IODOT wind up so strong that you want to perform it again now?
I wanted to see how much I really wanted to do this. The early ‘80s were a barren time for the likes of me on the surface, but little seeds were sprouting in the sheltered cracks below that sprouted into organisms like R.E.M., who, God bless them, made the place more habitable. Meanwhile, I wrote those songs out of compulsion, not because anybody wanted me to make a new album—even me. It’s been that way ever since, really. IODOT, as you put it—one letter short of IDIOT—is its own world, an echo of the world I lived in which is now gone. Even then, I was thinking about a gone world. Now I remember remembering. It’s those spirals again.

Do you feel as if your work as a songwriter now is less whimsical or more whimsical than it once was?
I go from light to dark, it’s all part of the spiral. I don’t see myself as whimsical. There has to be some basis on which an artist makes selections, and mine are instinctive. They don’t always work, I admit—perhaps that’s when they seem whimsical. The main thing is to tell it like it seems, not as you would wish it to seem. But to tell it like it is might require a sharper eye than mine.

The Egyptians and the ’80s: Why were they a perfect match?
Morris Windsor, Andy Metcalfe and I had played in the Soft Boys in the late 1970s, and after a break reconvened in the mid-1980s. By then we were more in control of our playing, I was more in control of my songwriting, and the musical climate was ready to receive us. This lasted until Nevermind came out, at which point “alternative” rock went one way and we went the other. Then I became a folk singer, which was where I’d come in two decades before.

Were you a fan of the ’80s?
I had a great time in much of the 1980s and remember fondly getting my nose in the rock ’n’ roll trough. The shoulder pads and big hair extended to the sound of the music: great records like Mirror Moves by the Psychedelic Furs and Fried by Julian Cope are now digitally stamped with the sound of that era, but the songs are still supreme. Hopefully that applies to Fegmania! and the rest, too. I still can’t believe the 1980s are in the past. They felt at the time like an eerie future that I was stranded in. I grew up in the 1960s and have always felt I was the last to hatch out.

My favorite songs from those efforts are “My Wife And My Dead Wife” and “Raymond Chandler Evening.” What do you think that says about me?
That you like short stories, perhaps? A movie entitled My Wife & My Dead Wife came out recently, though no one I know has seen it. Raymond Chandler would shrivel up and die if he saw L.A. now. Smoke-free bars selling light beers under the neutral glare of the TV. Horrible!

Gotta Let This Hen Out! is a raucous live album. What do you remember about that show?
That the Marquee was not smoke-free, nobody drank light beers, and there was no TV in the building. Some mad fellow threw a patchouli-drenched flag onstage and kept insisting in the bar afterwards that I thank him for it, fully. Eventually I got angry with him and they threw us out of the pub. I have never lost my temper since. It was a great gig, even though I kept the chorus pedal on my guitar on the whole time. I must have known it was the ’80s.