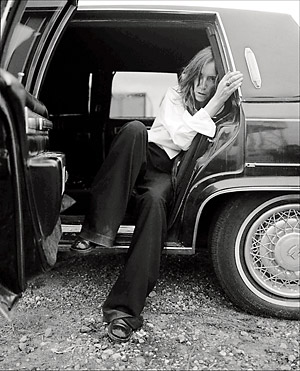 It’s not unusual for dedicated directors to spend months or even a few years following musicians for a documentary. Steven Sebring took that concept to extreme lengths in creating Patti Smith: Dream Of Life. Sebring, a high-end fashion photographer with no formal filmmaking experience, tailed Smith around the globe for 11 years, not so much chronicling her life but living it alongside her.

In 1995, Sebring was assigned to photograph Smith. She was emerging from a difficult time in her life—her brother Todd and her husband, MC5 guitarist Fred “Sonic” Smith, died the previous year—and was ready to release Gone Again, her first record in eight years. Sebring visited Smith’s suburban Detroit home, and the two spent most of the day at a coffee shop talking. Only at the end of their time together did Sebring shoot a few rolls of film. Several weeks later, Smith invited him to see her perform in New York City.

“She comes out spitting and reading poetry, and I was like, ‘Is this the same woman?’ I couldn’t believe it,” says Sebring. In a moment of spontaneity, he asked if he could start filming her. “She sort of laughed at me. I know she has been approached by filmmakers in the past, but she always says no. I didn’t put a contract in front of her; I just started showing up.”

Without much of a plan and running up huge credit-card debt in the process, Sebring followed Smith everywhere, from France to Israel to Japan to New Zealand, over the course of more than a decade. He was always there with his camera, capturing her visit to Beat poet Gregory Corso’s gravestone in Italy and Rimbaud’s birthplace in France.

Dream Of Life works best in its quiet moments. We see Smith hanging out in her apartment at the Hotel Chelsea, where she displays the cremated remains of photographer and longtime friend Robert Mapplethorpe. We see her with daughter Jesse and son Jackson, who seemingly grow before our eyes during the film. Such intimate moments are usually reserved only for close friends and family.

“We’ve become like brother and sister,” says Sebring. “We can talk about anything together.”

Sebring tossed out the conventions usually associated with documentaries, such as the talking-head-type experts offering perspective and chronological history. In Sebring’s estimation, the lack of an agenda helped sell him to Smith. “There’s not a lot of stuff on Patti for a reason: because she doesn’t like to have a lot of stuff out about her,” he says. “And she also knew that I wasn’t into making a film to make money or exploit her.”

Dream Of Life portrays the 61-year-old Smith in all her roles: mother, performer, artist, activist. We see her at anti-war demonstrations, in concert, backstage with her band and hobnobbing with the likes of Flea and former beau Sam Shepard. Sebring employs a hodge-podge of film styles: color and black-and-white, high and low resolution. It’s often like browsing through a gorgeous coffee-table photo book. (A companion book of photos and quotations has also been published to coincide with the film.)

Despite its many palettes and tendency to zigzag in time, Dream Of Life is very much in keeping with Smith’s philosophy. As Sebring notes, she often says, “Life is not some vertical or horizontal line. You have your own internal world, and it is not neat.”

All this, of course, makes the 109-minute Dream Of Life, which comes out on DVD in January, a harder sell to audiences beyond card-carrying Patti Smith fans. “This is the only document of her that will ever exist,” says Sebring. “So as far as I’m concerned, it doesn’t matter about [the tough sell]. It matters that it’s something from my heart, Patti’s heart.”