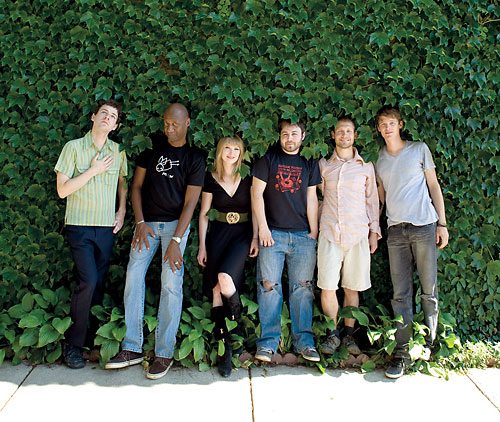 Searching for existential meaning in modern pop music can often feel like a spelunking expedition in an empty swimming pool. By contrast, Son Ambulance’s explanation of the appropriately meta-sounding Someone Else’s Déją Vu (Saddle Creek) comes straight out of the deep end.

“Joe (Knapp) just started talking about the familiarity of music, about a jukebox in a room playing this song that’s never been made before,” recalls drummer Jeff Koster, who shares co-writing credits with band founder/singer Knapp on Son Ambulance’s third album. “He was imagining this room and this weird feeling coming from the jukebox, but you’re not really hearing anything. It created in our minds this dreaminess, like, ‘What is music?’”

If this seems like a rather weighty question for five twentysomething rockers to tackle, consider that the Omaha, Neb., outfit does have one elder in its midst. Koster credits 53-year-old bassist Dereck Higgins with expanding the group’s musical horizons. “He’s a staple musician of Omaha,” says Koster. “He’s been in a lot of important bands. He’s become like the Triforce.”

His quarter-century of seniority notwithstanding, Higgins is part of a recent infusion of new blood. He and saxophonist James Cuato joined Son Ambulance’s ranks during the recording of Déją Vu, which also features contributions from members of Omaha stalwarts the Faint and Tilly And The Wall.

“The band is so new, we don’t really know any old songs,” says Koster. “It’s a mixture: (Knapp’s brother) Daniel is the only other member from (2004’s) Key, and I’m the only member previous to Key. We’re now trying to learn to play what we made in the studio. It’s actually quite difficult.”

Coming after a two-year hiatus, Déją Vu signals a fresh start for the sextet. The balladeering of Key and 2001 debut Euphemystic has been transformed on the new album, wrapped up in the mind-altering trappings of ’60s Tropicàlia and ’70s psych pop: chirping birds and choro rhythms; fluttering vocals and funhouse reverb. The evolution didn’t stop at the studio.

Says Koster, “(Producer) A.J. (Mogis) came to one of our shows—well after the recording—and was like, ‘Whoa, if I’d known you wanted to do that, I would’ve done this.’ And we were like, ‘Yeah, if we had known we wanted to do this, we would’ve done that.’ It’s a little more lively (now). We’ve added more melody. It’s more soulful and a lot bigger.”

It’s also not uncommon for songs to begin in one decade and end in another. “Legend Of Lizeth,” for example, starts with golden oldie “Earth Angel” and finishes at Pink Floyd’s “Welcome To The Machine.”

“That’s the thing about influences,” says Koster. “We’re not trying to rip anything off, but all these melodies are stuck in your head, whether they’re new or a commutation of something else.”

2 replies on “Son Ambulance: Grown Together”

[…] The winter 2008 issue of Magnet magazine is out and features a nice article on the band. Here is a link to the article online https://magnetmagazine.com/2008/11/11/son-ambulance-grown-together/ […]

for not knowing any songs, they certainly have a lot of very impressive ones! They are one of my favorite bands, i love the depth and abstract of their music.