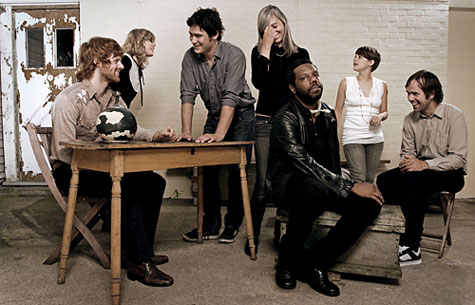 The title of the fourth album from Montreal drama-rock collective the Dears isn’t an accident. Missiles finds frontman Murray Lightburn in an emotional bomb shelter, waiting out the shock and awe of his life as it rains down like shattered fragments from above. On tracks such as the Roxy Music-like “Disclaimer,” the gospel-tinged “Saviour” or the title track (what I imagine Love might sound like if fronted by Morrissey on a non-medicated day), Lightburn spits out his rawest, nerviest work to date. Basically, it’s Tonight’s The Night for the emotionally disenfranchised.

MAGNET phoned Lightburn at his Montreal home, where he explained the changes that have become part of the Dears’ running narrative.

Missiles seems very cinematic, and plays sort of like a movie in that “Disclaimer” and “Saviour” really form more of a narrative or throughline for the music than I’ve experienced listening to a Dears record before.
When we were doing the sequencing, Natalia (Yanchak, Dears keyboardist and Lightburn’s wife) and I were thinking that it played out like a musical, almost. Interesting that you picked up on that.

It builds a certain amount of drama. It’s not like you’ve necessarily written a concept album—it’s just that it feels more like a story, in chapters, than what you’ve done before.
Yeah, yeah, yeah. That was the idea.

The band’s lineup has changed pretty significantly, and my impression is that you and Natalia handled much more of the writing and playing chores than before.
George (Donoso) and (Patrick) Krief played on the record and were a big part of the making of it. Um, they’re not in the band, not touring on this album, no.

I’d read online that Lisa and Laura from Pony Up are now in the touring band, then?
Right. Are you familiar with that band?

Yes, I know some of their work. But my impression with the Dears is that it’s a pretty fluid lineup. It’s just the musicians around you and Natalia who are best positioned or able to help you communicate the songs you’ve written or the music you’re hearing in your head at any given time. Am I wrong about that?
[Sighs] It’s hard to say, I think that’s … let me start all over. [Laughs] I’m trying to be diplomatic here. When I started this band, a very long time ago, I would write songs and then multi-track with two ghetto blasters, recording and playing back and then me playing along with these tracks. Then I’d go back and add harmonies. That’s the genesis of the process of making Dears music. It was always too grand, and that’s still the case today, in fact. Now I have access to a lot more technology.

But I like the idea of just you and two ghetto blasters multi-tracking, though. If the songs are right, that’s all you need.
[Laughs] Yeah, I like it, too. I missed the purity of that process. I just straight-up asked the band if we were making another record together, and I got one positive response, and one that wasn’t exactly what I was hoping to hear. It was dependent upon something that had nothing to do with either art or music, so I found myself asking, “What kind of situation am I in here, anyway?” The Dears’ prime directive, if I may sound so Star Trek about it, is to deliver art. [Laughs] And it just started to feel as if the circumstances around that were becoming more important than what our primary function was. Once you go down that rabbit hole, you can wind up in a situation where you’ve lost all meaning to what you do. That’s not the way I roll, and it’s not what was in store for the Dears if it was to continue. Getting back in touch with the roots of the band was important to me.

My impression of your music is that it’s in touch with being an outsider, with what it’s like to feel ostracized, or alienated, grasping for connection. To play that kind of music with conviction, it needs to be—
It has to be the real deal. You can’t fake it. Right. That’s essentially what went down, but not everybody was up for those shenanigans, you see. If you were a fly on the wall during the Dears’ last six months together before we stopped playing shows, mid-July of last year, it would seem like the logical thing to do. Well, there were two options: to break up the band and for me to “go solo,” with everyone going on to other projects. The guys that were in the band at the time had all replaced other people before, so in essence it became time to replace the replacements. And it’s kind of like anything else, now we’re good for another decade with another bunch of records. We’ve cleaned house on both sides, with the exception of our Canadian label, everything’s different. It feels good, it feels right.

I suppose you can be in chaotic conditions and create art, but it seems like any creative endeavor requires organization. Missiles hangs together well, but stylistically, you sound like you were free to try on lots of pairs of trousers during its recording.
That’s exactly what the process was like. It was very fearless. That’s the only kind of record you can make, when you feel like you have nothing to lose. It’s so raw, and personally, those are some of my favorite records, the ones that are just flat-out raw delivery. That doesn’t really fit well with our image, and it’s probably the single biggest reason we parted ways with our U.K. label (Bella Union). It’s obvious that they were looking for something more polished from us. I just found that strange, because when we met, we were this scrappy band, and always will be. That’s the essence and beauty of the Dears. A lot of stuff that went down on the record started with demos that just evolved into a record. There’s some 3 a.m. “fresh in the brain, right onto the tape” ideas that made it to the finished product. It’s basically a super polished demo.

The longer the Beatles were together, the more fearless they became about leaving the edges shaggy and unfinished. The White Album is perhaps my favorite record of theirs, and it sounds like four guys recording solo albums within proximity of one another—they just happened to be in the same studio or something.
Yeah, it’s pretty ugly, but it’s so brilliant because of that.

When I listen to a song of yours like “Lights Off,” there’s an element of that emotional tearing, the same things that make me uncomfortable about The White Album. I prefer that to something more polished, actually, because it feels like it gives more emotionally.
There was a time when we were discussing the vocal track for that and it’s really harsh because I recorded it myself in our basement at, literally, five in the morning. I must’ve done a hundred takes of it and for whatever reason I couldn’t nail it down. I was by myself, getting really tired, was probably drunk, and was so exhausted but couldn’t give up on the vocal. It was actually the utter loneliness of being in that basement that inspired me to keep going until it felt right. Even though it sounds terrible, it’s delivered “right.” When I finished and was listening to the take with my head on the desk, I looked up at the clock and it was 5:03. It was so fitting that this is how it’s supposed to be. I’ve been singing for four hours, ready to shoot myself in the fucking head. [Laughs]

For a “polished demo,” there are actually some songs on the album that have a veneer of slickness to them that’s almost a head fake. “Disclaimer” has some Roxy Music-like sax, on it …
Oh, yeah, that’s my old man playing on that.

Which sounds so terrific, kind of perfectly out-of-place, in a way.
Playing sax like only a 70-year-old guy from Belize can. It’s so Caribbean, Torquil (Campbell) from Stars noticed that. That’s who my dad is, that’s his school of saxophone playing in a nutshell.

“Disclaimer” should give the people paying attention a pretty big clue about the character who’s singing.
Then I guess we did our job. [Laughs]

Who’s in the band now?
We were at a half dozen before, now we’re carrying seven people. This record is pretty tough to deliver live, but the funny thing is that it’s orchestrated in a way that people are standing around for half the song doing nothing. There’s a build, but when these dudes come in, it’s pretty massive. It’s a bit tough to navigate through all that stuff, but the amount of noise we’re making when it’s full throttle, it’s like having five gears as opposed to three.

One reply on “Q&A With The Dears’ Murray Lightburn”

Hi Murray:
I’m not sure if you remember me but we worked together at ROJO on 9600 Meilleur Street in Montreal during the late 80s. Your brother James (Jimmy) was our boss. I have been trying for years to contact Jimmy but with no success. Can you help me?