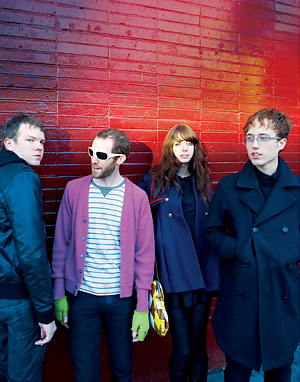 With a blustery, lysergic guitar squall that evokes both the circular scuzz of Spacemen 3 and the primal noise of early Jesus And Mary Chain, the sound of Ringo Deathstarr is often pegged as some part of a sonic revivalism. The thing is, most listeners can’t seem to figure out exactly what these Austin musicians are reviving. Are they shoegaze? Are they psychedelic? Some regressive mixture of the two?

None of the above, according to guitarist and songwriter Elliott Frazier. “People are lumping us in with the neo-psychedelic bands [like the Black Angels], because there’s a wave of that in Austin right now,” he says. “We play with some of those bands, but aesthetically we’re not really doing that. We don’t have a message in our songs about any sort of social thing going on. I like fast tempos and more punk-rock kind of stuff. I think there’s a good amount of punk aesthetic on [2007’s self-titled EP], short and fast songs. I’m more into that than just geeking out on a delay pedal for five minutes.”

By the time five minutes elapses in a Ringo Deathstarr set, you’ve likely heard two songs and the beginning of a third. Though bathed in Creation Records-ready washes of prickly feedback, the five songs on Ringo Deathstarr (issued by U.K. label Spoilt Victorian Child) exude a directness and propulsion that’s all too often missing from the current indie-noise landscape. While that may be a result of Frazier’s youthful musical pursuits (he grew up in Beaumont, Texas, playing punk and metal), it’s more likely due to a perspective on music-making that’s built on the idea that the tunes a band creates should actually be enjoyable for the players and the listeners.

“This is just for fun,” says Frazier. “Playing music that’s fun for us to play is how I want to keep it.”

Ringo Deathstarr has gone through its share of growing pains since Frazier formed the band in Austin with fellow Beaumont transplants in 2005. Though Frazier is still the primary songwriter in the group, he feels confident that the current lineup—guitarist Renan McFarland, bassist Alex Gehring and drummer Daniel Coborn (who recently replaced Dustin Gaudet)—is going to be the one that makes Ringo Deathstarr a cooperative effort.

“We’ve had a million lineup changes, but this lineup is now what I consider to be the ‘real’ band,” says Frazier. “I did most of [the EP], because between February and May (2007), there were at least four different people coming in and out of the band. But we’re trying to write more as a band now. If other members want to bring ideas forward and it works with the songs we already have, then I’m all about that.

“In fact, we came up with something pretty cool the other night. Well, I don’t know if we were really drunk or what, but it seemed cool. We’ll just have to wait and see the next time we play it.”