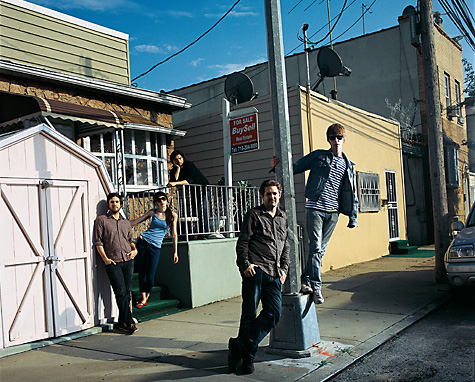 If you’re possessed with even a moderate level of curiosity about rock ‘n’ roll history, you’ll already be attuned to the Rosewood Thieves. Featuring the urgent rasp of frontman Erick Jordan, the rollicking Wurlitzer of Mackenzie Vernacchio and, above all, a timeless sense of melody, the New York band taps into all the best sounds from the heydays of John Lennon, T.Rex and the Byrds. Go ahead and tell Jordan his band sounds familiar. He won’t mind.

“When the Beatles first started, they were just copping the Isley Brothers,” says Jordan. “I read something about Lennon where he’d hear something and be like, ‘Oh man, I want to do that, that kind of song.’ That’s how I feel when I hear something really cool. I want to be able to sing that kind of thing every night … It’s either that or be a cover band, I guess.”

“Music just seemed like it evolved more naturally back then,” adds Vernacchio, who shares a Queens apartment with Jordan. “Now it seems like there’s a lot of pressure to just make a new sound, but it’s much more interesting to try and figure out what they did back then and bring that into your own song-building.”

Yet for all the backward-looking reference points, the influence that gets Jordan most excited is early-’70s pop obscurity Emitt Rhodes. A McCartney-esque singer/songwriter who released an acclaimed debut at the age of 20, Rhodes dropped out of the business at 23 after a rash of label difficulties. It’s a career path the 22-year-old Jordan likely sees as a cautionary example.

Jordan grew up in East Stroudsburg, Pa., surrounded by music; his father, a musician himself, bought him a four-track as a reward for making the high-school baseball team. Jordan recorded a few demos with Thom Monahan (Pernice Brothers, Devendra Banhart) not long after high school. As those recordings started making the rounds, Jordan reconnected with Vernacchio, a former classmate at a California arts school, to form a band. The Rosewood Thieves signed with the now-defunct V2 label in 2005.

The new regime at V2 pared down the band’s debut album to a six-song EP. Though the abbreviated From The Decker House, which features guest spots from Vetiver’s Andy Cabic and Whiskeytown’s Mike Daly, benefited from fortuitous song placement on Grey’s Anatomy and Entourage, the Rosewood Thieves were cut loose from the label. Rather than test the market, however, the band took matters into its own hands, releasing an expanded Decker House on iTunes and continuing to write and record new material. A follow-up EP, acoustic-folk stunner Lonesome, appeared in 2007, and what began as another EP became the new full-length Rise & Shine, an exuberant blast of ’60s-loving pop perfection whose songs are stickier than a summer dashboard. The records are all available from the band’s website, and though the Rosewood Thieves wouldn’t reject the right sort of label interest, they’re not exactly looking, either.

“It’s fun to be connected (to listeners) a bit more,” says Jordan. “Because even when Decker House came out, you don’t make any money. I mean, who knows how many people are buying them? That’s the biggest thing for us.” He laughs. “We just want to know why we’re not making any money.”

The Rosewood Thieves have another EP lined up for early 2009, a collection of covers titled Heartaches By The Pound: The Rosewood Thieves Sing Solomon Burke, and they’ll be taking their songs on the road for much of the near future. Hopefully the touring will offer fewer surprises than an ill-fated recent trip west to mix Rise & Shine. Besieged by panic attacks as soon as he boarded the return flight home, Jordan stayed behind to see a battery of doctors before finally suffering a seizure as a result of a prescription-drug allergy. (The incident spawned the dark, queasy “When My Plane Lands.”) Stranded in California, Jordan begged his bandmates for help.

“I was like, ‘Listen, you guys need to get me money out here because I’m going to buy a van and drive back,’” he says. “I was trying to convince them: ‘We need a van anyway!’”

I have seen these guys live… they are the real deal!

This is truly a great band,If you don,t own the new album “Rise and Shine” buy it today! these guys have a great retro sound with current scene appeal.
this Album is #1 in my top 10 for 2008.

This is a band that everyone should see live. Not that the recordings aren’t great. They are. There is just something special about hearing them in person. If you live on the East Coast, you are lucky. They will come around for a show. I recommend you make an evening of it and go see them.