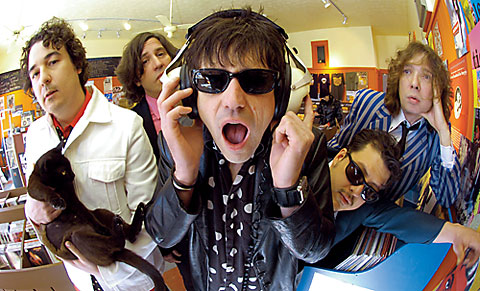 “Most bands aren’t proxies for suicide hotlines,” says John Petkovic, frontman of Cleveland glam-rock outfit Cobra Verde. But it turns out that Petkovic’s latest project—an as-yet-unnamed band with J Mascis, Witch bassist Dave Sweetapple and Cobra Verde guitarist Tim Parnin—provided an emotional and creative lift when he needed it the most.

“2007 was a total catastrophe,” says Petkovic. “My mom passed away from bladder cancer in December, and it was grueling. I had insomnia for about a year and didn’t even pick up a guitar for five months. I would just drive around the block. I was like a mental patient without a hospital.”

In December 2007, Petkovic got in his car to clear his mind and started heading east on I-90 with no particular destination. He ended up at Sweetapple’s home in Vermont. Mascis, who lives in nearby Amherst, Mass., soon arrived to commiserate, and the three friends hatched plans to make a record. Inspired by this turn of events, Petkovic returned to Cleveland and wrote 25 songs in two weeks; 12 tracks were eventually recorded in Cleveland and at Bisquiteen, Mascis’ home studio.

“I tried to get people to do things they usually didn’t do,” says Petkovic, who shares singing duties with bassist Sweetapple; Mascis sits in on drums and guitar. “J would ask, ‘What should I play?’ I told him to play guitar like Johnny Thunders, knowing he doesn’t play anything like that.”

Though the LP is borne of grief and personal strife, Petkovic insists it’s not a downer album and instead promises “coherent rock action.” Mixed in October by John Agnello (Sonic Youth, Hold Steady), the record currently has no title or release date.

Meanwhile, Cobra Verde’s first studio album in five years arrived in October via Scat Records after an 18-month delay. Titled Haven’t Slept All Year in reference to Petkovic’s insomnia, the LP was finished and set for release in summer ’07 when he went on hiatus to care for his dying mother. Says Petkovic, “These two records are bookends for everything I’ve been through.”

I wonder why Robert Pollard isn’t on this? I kid. I kid.