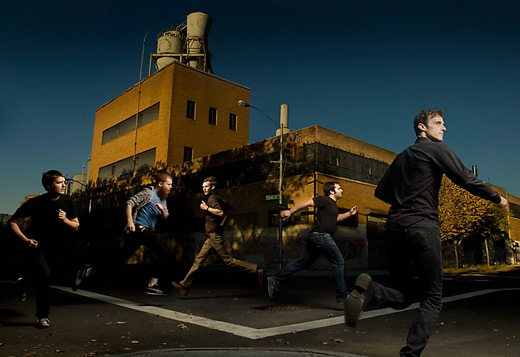 Two songs from Other People:

“Watch As They Go”

MAGNET interviews co-frontmen David Slade and Collins Kilgore of American Princes, creators of our favorite album of 2008. As noted in our year-end accolades, Other People (Yep Roc) works out jittery, cool ’80s guitar sounds but isn’t a slave to decades-old fashion. The Little Rock, Ark., band mainly delivers powerful pop hooks—and, as we learn below, a little bit of Jean-Paul Sartre. Slade and Kilgore spoke to MAGNET before reconvening in Little Rock to begin work on American Princes’ next album.

One of the things we liked about Other People was that it incorporated some ’80s-referencing elements but managed to sound new. It’s not a retro exercise. Was that something you talked about before starting the record?
Collins Kilgore: In terms of the guitar sounds, that’s something we’d been experimenting with before going into the studio. A lot of people are afraid to use a chorus pedal, but it can sound really nice if you do it right. It really came together when we went to work with Chuck Brody. We were a little bit out of control, and he made everything work well.

Chuck Brody is known as a hip-hop producer (Wu-Tang Clan, Beastie Boys). How did he hear about American Princes in the first place?
Kilgore: He saw us on MySpace. We played CMJ in 2006, and he was reading the names of bands, going to check them out after looking at their MySpace pages. He was cold-calling people, seeing if they wanted to do some recording while they were in town. So we did a one-off with him.
David Slade: We did “Kid Incinerator.” It was definitely one of those moments that, should we ever be unfortunate to have a biopic about us, would be one of those [pivotal] scenes. We introduced ourselves to Chuck, he gave us some notes on the song, we ran through it once and he instantly made it a thousand times better.

“Kid Incinerator” (which appears on Other People) seems like a transitional song—it’s more in the distorted-guitar style of (2006’s) Less And Less.
Slade: It was definitely the bridge between the two records. We wrote it circa Less And Less, but we wanted to bring it on board. Since it was the first thing we recorded with Chuck, it was kind of a gateway drug and enabled us to move on to the other things on the album.

Lyrically, this sounds like a record made by a band that’s been out on the road. You’re away from girlfriends or wives and feeling a wide separation from loved ones. Is that an accurate read?
Slade: I think it’s absolutely accurate. Our stuff tends to be pretty lonely, and our time on the road informed where we were coming from. Not to get too pretentious, but I aim to right now, so watch out, everybody.

I think now is the time to be pretentious.
Slade: [Laughs] The title is a nod to the Jean-Paul Sartre play No Exit. The line is, “Hell is other people.” My understanding of it—and it’s not very good, I couldn’t make it as a lit major so I did film studies—is it’s not that hell is the company of other people. Hell is the perceptions of other people—the fear that people around you will see you for how you really are. That you’re not the persona you project to the world.

That you’ll be found out or exposed.
Slade: Right. That’s a lonely situation. The assumption that the worst thing that can happen is people will know the real you. That’s where the record is coming from: wrangling with identity and a fear of being found out.
Kilgore: I’d like to say, too, it’s not just that we were on the road away from our girlfriends and whatnot, but we were isolated from society. Our day-to-day interactions with people were pretty superficial, and we were feeling alienated from society at large. There are a lot of reasons to be disenfranchised. At the time we were writing the record, we were in the middle of a seemingly unending Bush presidency. I really think we felt things were bleak.
Slade: It was a really painful time if you think about where this country was, which is an analogue to the ’80s. You had this president who surrounded himself with hawkish people and a country whose mindset was based on isolationism and jingoism—even more so in this decade than the ’80s, but a parallel can be drawn. This past month and a half has been one of the most surreal in my life. For the first time in almost a decade I feel significantly less afraid, in a way I couldn’t have ever imagined. It’s like being released from prison.

The song “Watch As They Go”: I read that as a life-during-wartime song. Watch your friends and neighbors go to war while you stay home.
Kilgore: That’s what it’s about. Not only is it about people going off to war, it’s also about the indifference of other people. There are two interpretations. The lines in the song can also apply to people staying at home and drinking themselves to death. I see people in Little Rock who have a lot of ambition and want to accomplish a lot, and all they do is the same thing over and over again. I’ve been that person. At the same time, there’s this whole other thing that we’re completely disconnected from, which is this very serious war. We’ve internalized it. It’s not something that people go out and protest anymore.

What I like about the song is that it has meaning, but it doesn’t sound oppressive or heavy-handed. It maintains the sense of a fun pop song.
Kilgore: We didn’t want to browbeat people. As serious as those issues are, they weren’t consuming our lives. It’s something we wanted to get across, but subtlety was important.
Slade: Fundamentally, we’re a pop-music band. That’s the thing that drew us in. I’ve said this ad nauseum: The best thing about pop music is that it gives you a framework to think about larger issues in a manner that is also exciting and fun.

American Princes are kind of an everyband: You’re from the Midwest, you’re on a mid-level indie label, you’re not part of any trend or scene. What are the advantages and disadvantages to that?
Slade: It’s a lot less likely that we’ll get a juicy support slot. We’re not the hot new band from Portland or Brooklyn or Chicago. So there is a downside. The converse is that, as sounds and scenes come and go, we’re more insulated from the backlash: “Oh, you’re listening to two-man art-rock noise? That’s so Providence 2003.” When all is said and done, we’ll have a body of work we can look back on and be proud of and it will be something that’s also idiosyncratic, that’s really ours. That’s the best you can hope for as an artist.

This is a year that we’ve seen the music business go through a lot of changes. We saw music magazines go under. Labels are pulling back on how much they spend. How did that affect you?
Kilgore: A lot of albums come out at same time (of the year) for strategic reasons. A lot of albums come out in the late spring, like ours did, in order to take advantage of the touring season. So there were a ton of other bands on the road at the same time we were. Gas prices were crazy. People were going to fewer shows. It was fun, but we had to wonder whether it was sustainable. We saw friends of ours in other bands either stop touring or just pack it up altogether. I feel like there are going to be a lot fewer heavy hitters and there’s going to be a larger musical middle class. I know that’s not a revelatory statement, but the way that it plays out will be interesting in that mid-level bands will be able to get more attention. I had a feeling for a while that music was getting worse and worse, and now it’s starting to turn around. People have to spend a lot more time in their basement now.

Do you mean bands weren’t spending enough time working on their songs and were just getting music out there so they can fulfill their touring cycle?
Kilgore: My real theory is that people who do well and tour a lot, they have to have a lot of business savvy. Sometimes those people and those attitudes don’t necessarily breed the stuff of the highest artistic content. Even great artists get mired in the grind of thinking, “When should we be on the road? What’s our budget for the next three months?”

You’re saying that established artists can be most concerned with having an album to promote on tour.
Slade: It’s also becoming more feasible for bands to craft songs with an eye toward licensing them. I’ve seen much more interplay between the commercial sector—goods producers—and rock ‘n’ rollers. Which I think has led to more sterile music, because it’s hard to sell Saturns or iPods with edgy, interesting music.
Collins: Have you heard the five-dollar foot-long song from Subway?
Slade: I do love jingles. But when I heard a Modest Mouse song in a minivan commercial, I was like, “It’s over.”

[Long, circa 2001-style discussion of music and commercials ensues. American Princes are not pointing the sellout finger at anyone.]

What topped your lists this year?
Kilgore: Both of us are TV On The Radio fans.
Slade: I really thought Santogold was fantastic as well.
Kilgore: I disagree with David on that one.

Do you keep up with all the year-end lists from music magazines and websites?
Slade: Not as much … I’d like to have a grasp of what’s out there right now. It’s hard. I liked, for instance, the sound of the Fucked Up record when I first heard it and thought I’d like to listen to it more. But I just never did. Same with the Deerhunter record and other things people were touting. Even bands I love, like Lansing-Dreiden or the Night Marchers, I just never stuck with them.
Kilgore: I pay attention in spurts. I used to be pretty feverish about it but there wasn’t a lot of payoff. I’ve been a lot more laid back about it this year and it’s been more rewarding. It’s the way I used to get into music: I’m out somewhere and I hear it, or I’m at a friend’s house and they play something that resonates. I really like the new Dr. Dog record. I never gave them a fair shake before.

Any high points or low points for the year?
Slade: This, actually, is the high point.
Kilgore: (Multi-instrumentalist) Will (Boyd) getting his amp stolen in Des Moines was the low point.

4 replies on “Q&A With American Princes”

cool guys! great to see such a humble group with such a deserving record–will definitely stick with them over the years

Best wishes from MAGNET to American Princes bassist Luke Hunsicker, who’s recovering from an operation to remove a brain tumor. Our thoughts are with him and his family this holiday.

[…] Read the full Magnet interview with the American Princes here. […]

I have seen this band grown in so many ways. They are not only in my opinion one of the best bands out there, but they are also the nicest bunch of young men to have ever crossed my threshold. I know that the future holds only great things for them. When the world takes a hard look at how talented they are, watch out……