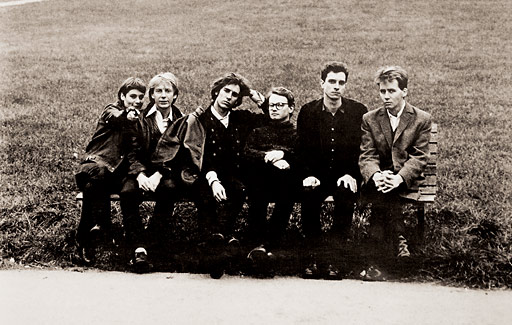 DOVEMAN Footloose [Brassland Music]
Wow, is that Bacon I smell? You betcha—and tender anarchist Doveman (a.k.a. Thomas Bartlett) fries it up real good, recontextualizing the film soundtrack (Kenny Loggins, et al) as a meditation on mortality and loss. Doveman’s take on Footloose was available for free on his website for about a month before being removed due to a cease-and-desist order from film-studio lawyers. [dovemanmusic.com]

SUICIDE Live 1977-1978 [Blast First Petite]
Limited-edition (3,000 copies) box housing six discs’ worth of rude, crude, audience-taped Suicide that capture Alan Vega and Martin Rev in full provocateur mode. Don’t forget to duck; as the booklet’s liner notes helpfully outline, that’s the sound of a pint glass being hoisted directly toward the stage. Punks, it seems, didn’t take kindly to a guitar-less duo whose singer taunted them and beat the stage with chains. [blastfirstpetite.com]

VARIOUS ARTISTS Do The Pop! Redux Part One [Shock/Savage Beat]
Yet another installment in archivist David Laing’s overview of antipodean punk roots, from Radio Birdman, the Saints and the New Christs to the Scientists, the Lipstick Killers and the Dagoes. Anybody with even a passing interest in vintage Aussie rock should check out the Do The Pop! titles. It’s a history lesson and an earwax-cleaning session all rolled into one.

CHUCK PROPHET Dreaming Waylon’s Dreams [Evangeline]
Doing cover songs is risky; remaking an entire album—here, Waylon Jennings’ Dreaming My Dreams—is borderline lunacy. But Prophet, by revisiting the spirit while not attempting to recreate the specifics, pulls it off. 1,000 copies only, long sold out, but still available as a download. [chuckprophet.com]

CHEAP TRICK Budokan! [Epic/Legacy]
Now, while you don’t need to repurchase the two discs comprising At Budokan: The Complete Concert (they came out as a regular release several years ago), if you’re a fan of Cheap Trick in its prime, you do need the DVD/CD portion of this four-disc package that contains the April 28, 1978, Budokan concert in all its raw, exhilarating glory. They want you to want them—or at least to buy ‘em.

RODRIGUEZ Cold Fact [Light In The Attic]
Now this is how reissues should be done: pristine remastering, massive, detail- and photo-rich booklet and a sense of revisiting a genuine historical event. In this case, a cult hero from the early ‘70s ripe for rediscovery. Vinyl alert: The LP version comes with a bonus 45. [lightintheattic.net]

BRIAN WILSON “Midnight’s Another Day” b/w “That Lucky Old Sun” & “Morning Beat” [Capitol]
Amid all the hoopla surrounding the release of Wilson’s magnificent That Lucky Old Sun album this year, Capitol sneaked out this gold/orange wax, promotional-only goodie. Direct to eBay for some, but straight to the plastic sleeve and wall mount for me.

VARIOUS ARTISTS Carolina Funk: First In Funk [Jazzman/NowAgain]
A “collectible” from the standpoint of its contents: 22 slices of rawer-than-sushi funk and soul gems from the Carolinas region, circa 1968-77, plus the usual massive-booklet and detailed liner notes funk fans have come to expect from the Jazzman label. You know it’s gotta be good with song titles like “Super Good,” “Good Time” and “Funky Party Time.” Get down! [jazzmanrecords.co.uk]