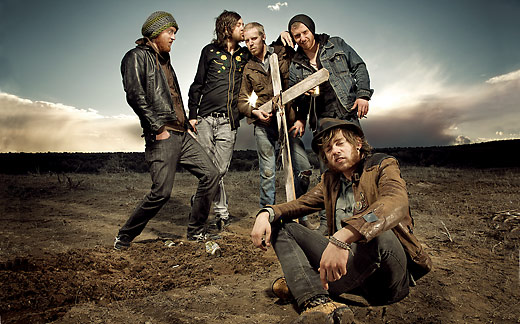 Amplified columnist Matt Ryan files his year-end report, weighing in on the hits and misses from the loud-rock end of the spectrum: God’s Revolver (pictured), the Sword, Fucked Up, Metallica, Underoath and more.

In years past, assembling a top-10 list involved taking a long list of contenders and painstakingly whittling it down to the best of the best. This year? Not so much. Trust that a very wide net was cast into the Amplified ocean for 2008, but in place of a bountiful catch, what came back to the boat was the musical equivalent of an old bicycle tire and a few discarded toilet seats.

Surely there had to be bright spots in an otherwise dismal 2008? Yes, there were a select few, and with apologies to the editorial overlords at MAGNET, here they are in no particular order:

GOD’S REVOLVER Little Black Horse Where Are You Going With Your Dead Rider? [Exigent]
These whiskey-guzzling malcontents from Provo, Utah, deliver an ugly, profanity-laced Western epic in the guise of wild-eyed rock ‘n’ roll, with guitars firing like well-oiled six shooters and story narration provided by a singer who conjures a steroid raging Glenn Danzig with a nasty cigarette rasp. Down, dirty, drunk and unhinged, this is the way rock is meant to be played.

FUCKED UP The Chemistry Of Common Life [Matador]
Granted, a 300-pound singer with a penchant for self-mutilation while performing live was the main reason these guys made headlines, but Fucked Up also had two stellar releases in 2008 with Chemistry and the epic Year Of The Pig EP. Other than Damian Abraham’s full-throated roar, the densely layered Chemistry and sparsely atmospheric Pig couldn’t be more dissimilar, but each experimental, hardcore-informed release shook things up in a year that needed a good shaking. [lookingforgold.blogspot.com]

THE SUBWAYS All Or Nothing [Sire]
Admittedly, we’re dipping into the mainstream here, but I defy anyone to name a rock song in 2008 as ragingly infectious as “Shake! Shake!” Produced by Butch Vig, All Or Nothing is all loud, crunchy exterior with a gooey pop center, allowing listeners to easily trace the Subways’ lineage directly to Nirvana’s Nevermind. The difference? Kurt didn’t team up with an ex-girlfriend on bass for insanely catchy call-and-response vocals. [thesubways.net]

THE SWORD Gods Of The Earth [Kemado]
That Gods is practically a carbon copy of 2006’s Age Of Winters is a petty complaint when faced with J.D. Cronise’s mighty ax. So many bands have tried to carry the heavy-metal torch that Sabbath first set ablaze decades ago, but Gods Of The Earth should solidify the Sword as the true keepers of the flame. [swordofdoom.com]

So that’s the list. A paltry four entries. To what can we attribute this dearth of material? Here’s what we know:

The flow of new music across the Amplified desk has slowed to a trickle. This is likely due to a combination of factors, including the overall declining state of the record industry and an economy in the crapper. Anecdotally, we can observe that punk labels contributing bands to previous top 10s have significantly scaled back their annual releases, or worse, have gone dormant.

Ironically, in this digital age of instant gratification, new material is harder to come by. If it arrives at all, advance music comes via email. You must go to a website, set up an account, enter your name, secret password, provide a urine sample, and if the technology gods are feeling benevolent that day, you can listen to a streaming version of the record without constant rebuffering or error messages. Journalists are pretty lazy people, and this is a lot of effort for bands that probably fellate farm animals in the final analysis.

Previously stalwart labels are skewing younger (read: shittier) in terms of target demographic. Epitaph, home to Bad Religion, Converge and Raised Fist, now champion the likes of Bring Me The Horizon, a bunch of stupidly coiffed Tiger Beat rejects whose formative experience would appear to be stumbling upon their uncle’s stash of metalcore CDs and slasher flicks. The band photo speaks volumes: a bunch of blood-spattered teens mug and grimace for the camera, with one pudgy band member looking not so much menacing, but like a five-year-old taking a dump.

Anticipating the howls of protest [cue crickets chirping] about this truncated list, let’s explore a few other releases worthy of mention, both in terms of praise and condemnation. For derision, even though arguably outside of MAGNET’s purview, one has to bring up, if only briefly, Axl Rose’s Chinese Democracy (note: lack of attribution to “Guns N’ Roses” is completely intentional). Have you ever packed way too much for a trip, requiring you, and perhaps an overweight neighbor, to sit on the suitcase in an effort to get it latched? Yep. That pretty much sums up the songs on Chinese Democracy.

Fan complaints of a compression-happy Rick Rubin aside, Axl’s contemporaries in Metallica fared much better in 2008 with Death Magnetic, a near return to form after their horrendous 2003 release, St. Anger (a.k.a. Lars Beating On Garbage Can Lids). Granted, Metallica’s brand of metal doesn’t sound so revolutionary in 2008, but don’t forget that Hetfield and Co. practically invented this shit 25 years ago.

Moving from the mainstream to way under the radar, bassist Caleb Scofield (Cave In, Old Man Gloom) released his second solo project under the Zozobra moniker this past year. While it won’t change your life, Bird Of Prey reveals an impressive wall of noise built from solid blocks of metal, doom and stoner rock.

Further afield, the French (!) band Gojira has been generating buzz as of late, no doubt due to its mastery of all the quintessential metal accoutrements: double kick drums, caffeinated, hyper-proficient riffing and growling vocals. This critic finds The Way Of All Flesh sufficiently badass, but tiresome over the long haul.

Finally, Underoath’s competent screamo/aggro will land Lost In The Sound Of Separation on many year end lists; nevertheless, the fact that these altar boys share the same belief system as Sarah Palin makes it very hard to take them seriously. A word of advice to Underoath and those who would emulate them: Metal is the devil’s business, boys.

Between MELVINS, Harvey Milk, Torche, Boris, Black Mountain, Jay Reatard, Mudhoney, Jucifer, The Apes, Modey Lemon, The Dirtbombs, and The Mars Volta You just couldn’t find anything to love? Try the unsung Human Eye – Fragments of the Universe Nurse. If even that doesn’t do it, I don’t know, not to be rude, but maybe you should consider the possibility that maybe the lack of good music isn’t the problem. maybe it’s your ears.