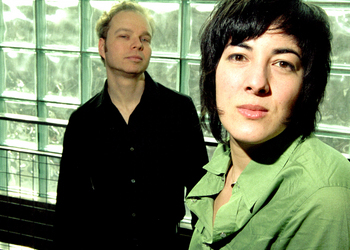 Damon & Naomi, who recently reissued their 1992 debut More Sad Hits, have released a limited-edition live DVD. Shibuya O-Nest 2008 was filmed on the duo’s Japanese tour supporting 2007’s Within These Walls and features D&N backed by a band consisting of Michio Kurihara (Boris), Bhob Rainey (nmperign), Helena Espvall (Espers) and Masaki Batoh (Ghost). The film draws from two Tokyo shows last January shot by Hiroo Ishihara, who did the same for Shibuya O-Nest 2005, the last limited-edition D&N DVD. In other Japanese-related D&N news, the Video Arts Music label has issued a limited-edition set of all the albums by Galaxie 500, the seminal band that Damon & Naomi were in with Dean Wareham back in the day. The trio’s three studio album (1988’s Today, 1988’s On Fire and 1988’s This Is Our Music) and the live Copenhagen (recorded in 1990 and released seven years later) have been reissued as a four-CD set that’s limited to fewer than 1,000 copies.

Damon & Naomi made us an excellent mix tape in 2005; to check out what’s on it, click here.