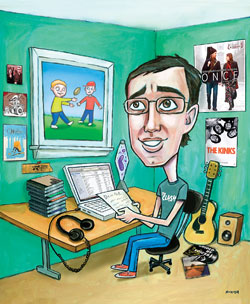 The occasion of MAGNET’s anniversary has a lot of us reflecting on just what the hell we think we’ve been up to the last 15 years. It turns out that what I’ve been up to is the slow, inexorable, sometimes painful realization that I’m as full of shit as everybody else. No way, gasp you, the loyal reader of this space. Surely you (that is, me) are joking, setting me (that is, you the loyal reader) up for some delightful and well-crafted punchline. But no, not this time. There is no joke. At least I don’t think there is. I really have come to the conclusion that I’m precisely as full of shit as everyone else.

Here’s why this is relevant for discussion purposes: When you’re given the privilege of a space like this to communicate with some number of random strangers, it’s assumed by all parties that you somehow deserve that privilege. That you’ve earned it. If I don’t feel like I have something worth saying, then there’s no way I sit down at my laptop and tweeze every painful one of the 1,100 to 1,300 required words from the shriveled lobes of my poor sodden brain. And if you don’t feel like I have something worth saying, even if you think that only because it’s sitting there on the final page of an otherwise really good and fun and smart music magazine, then you don’t make it this far. That doesn’t mean you automatically agree with what I’m saying, incidentally-only that you start reading this thing on faith that it belongs here.

So it has become kind of troubling for your humble narrator to continue to fill this space while growing ever more aware and certain that he (that is, I) is (am) just as full of shit as everyone else.

It will pain Scott Colan to know that he tipped the first domino in this line of self-awareness. The night I met the irascible Mr. Colan, at one time the bassist for a most excellent Philadelphia psych-rock band called Lenola, he opened the conversation with, “Phil Sheridan! Why are you so fucking angry?” It took several pints of brown ale and a lot of boring exposition to convince him that I’m not angry. I’m almost never angry. My explanation was that The Back Page columns, theretofore the only way he knew me, were written in a kind of “voice.” It was as if I were in character, and the character was this bitter, cynical, pissed-off grouch.

I was the music-critic equivalent of the guy who yells at the neighbor kids to get the hell off his lawn. In real life, the neighbor kids are on my lawn right now. My friend Roob (you’d know him if you saw him) has played a role in the slow dawning. Whenever I express some consternation about the usually long-overdue next Back Page, Roob likes to affect a concerned expression, pause for effect, then say something like, “Why don’t you write something about how music was better and more genuine 20 years ago than it is now with all the downloading and shitty radio stations?”

But the realization didn’t settle in completely, I admit, until I started paying attention to the occasional letters sent in by readers of this space. Especially the angry ones. It’s all too easy to dismiss those as coming from people who don’t “get it” or who have no sense of humor or who are just flipping assholes. And sometimes one or all of those things are true. But sometimes, it became clear, I was one or all of those things and the readers were right.

So: just precisely as full of shit as everyone else.

For this super-deluxe, extra-special 15th-anniversary edition, at least, the answer to that is to come clean. To out myself, in a manner of speaking. To admit that I’m just as full of shit as everyone else, including you and you and you and you and, especially, that guy over there. To step out of the “character” and drop the “voice” and try to explain what about music led me to write this column in the first place, 13 long years ago. And I have to borrow the words of Russell Hammond, as played by Billy Crudup in Almost Famous: “To begin with? Everything.”

That’s the truth. The one true and constant and never-failing thing in my life has been music. From childhood, when I tried to find meaning in my parents’ Ray Conniff Singers 8-tracks (only later did I realize they’d been scammed by the Columbia House program, which sent this crap and forced you either to send it back or pay), right up until last week, when I was blown away by the latest Okkervil River album, I have been endlessly enchanted and moved and thrilled and astonished by new music, new voices, new ideas.

I’d be that guy, the voracious MAGNET reader, if I weren’t writing for the magazine. But writing for MAGNET has brought me all kinds of gifts that I couldn’t otherwise have imagined:

Drinking with (the right) half of Cheap Trick.

Getting hugged by the supernaturally talented Robert Pollard and talking painting with the criminally talented Tobin Sprout.

Hanging out with the Wrens.

Giving the aforementioned Folds a commemorative MAGNET Zippo lighter after a set at the Khyber in Philadelphia, just after the first Ben Folds Five album came out.

Chatting with Ken Stringfellow of the Posies, then later pointing him out to my daughters when he was playing on TV with R.E.M.: “That one, with the pink hair.”

There were countless shows, some backstage passes, too many beers consumed. There were handshakes and intense conversations and laughter at shared musical embarrassments and enthusiasms. As fun as that was, it was sort of beside the point. The point was the music. The point was standing for too long in some too-hot, too-smoky bar and thinking about getting the hell out of there and getting some sleep, then being rewarded by a transcendent moment: an inspired guitar solo or perfectly played song or beautifully hit harmony part or delightfully unexpected cover.