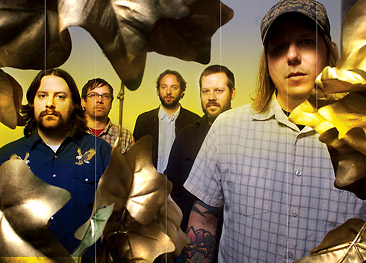 Jay Laughlin is holding up the bar somewhere in Philadelphia tonight. He doesn’t have to be drinking in order to support the psychedelic-pop end of the city’s indie-rock scene, though beers are encouraged. Memories of the singer/guitarist’s former band, Lenola, are etched in smoke on the walls of the Khyber, epicenter of the late-’90s Psychedelphia scene. Laughlin’s current band, Like A Fox, is heard on stages and jukeboxes from Northern Liberties to South Philly. The affable Laughlin—tall, tattooed and invariably peeking out from under a baseball cap—holds near-mayoral status in the town known as Hostile City.

Laughlin got an early start in the South Jersey straight-edge scene. At age 15, he began playing guitar in hardcore outfit Pointless (his mother would occasionally drive him to gigs); a year later, he formed Turning Point with singer Skip Candelori. After his punk phase had run its course, Laughlin re-emerged in 1996 as the frontman for Lenola, whose My Bloody Valentine-inspired guitar vertigo spanned five albums. Locally, Lenola reigned creatively and benevolently—at the record-release show for 1999’s My Invisible Name, the four band members were wrapped head-to-toe in aluminum foil as joints were freely passed around the audience—but national touring and sales proved disappointing.

“A week after Lenola broke up (in 2002), I decided on the name Garden State for my next project,” says Laughlin. “About a year later, a friend sent me a link to the trailer of a movie with the same name. Who would have thought it would have become such a big movie?”

“I’m way more confident in my abilities as a songwriter and as a singer,” says Laughlin. “I used to hide behind my insecurities as a vocalist and songwriter by drowning out everything with noise. I don’t feel that way anymore.”

For the first time, Laughlin wrote the majority of his own lyrics—his brother Chris and bassist Scott Colan were responsible for many of the words in Lenola songs—and Golden Arm became an album that connected Laughlin’s past and present. The title refers to a ghost story Laughlin and Turning Point co-founder Candelori heard as kids growing up; Candelori’s death in 2003 from a drug overdose gives Laughlin’s newest songs a bittersweet edge.

“Initially, the album title was meant to bring back happy memories,” says Laughlin. “But it took on a double meaning that really fit the vibe of the songs. Happy versus sad and good versus evil. It perfectly summed up what I was writing about.”