Spend 15 years in Philadelphia and you’ll figure out that things in MAGNET’s native city aren’t always sunny or bursting with brotherly love. But underneath the tough exterior are some pretty sweet sounds. In honor of our anniversary, we pay tribute to our hometown scene: 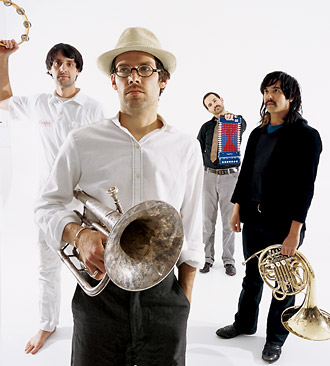 Man Man isn’t a typical pop group. It’s a pop group like a Salvation Army Preservation Society Jazz Band or a bunch of guys sitting on the stoop flailing on upturned plastic buckets and banjos made from cookie tins. Man Man draws from the grab-bag history of American music to fashion songs that sound both brand new and hundreds of years old.

2004’s The Man In A Blue Turban With A Face set Man Man’s template—manic, time-tight performances of grubby songs about outcasts and oddballs—but also got the band pegged as a carnivalesque novelty act. There’s a whiff of Dadaist indulgence—fans of Pere Ubu and the 1980s-era Magic Band, take note—especially in the group’s spectacular live shows. But as 2006’s Six Demon Bag and 2008’s Rabbit Habits proved, Man Man’s musical chops are genuine. After signing to Anti- for Rabbit Habits, frontman Honus Honus was pleased that his band had landed at the same label as stubborn misfits Merle Haggard and Tom Waits. “We just want to get people to start to understand our language,” he says. “Turns out there are a whole lot of people who want to go to hell along with us.”