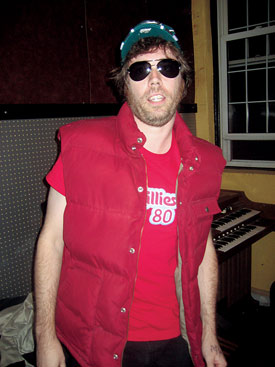 Wassup, everybody? How youse doin’? When the guys from MAGNET asked me to recount my favorite Philly rock memories, my first thought was, “What’s MAGNET?” But then I thought, “Oh, it don’t matter, Channel 29 ain’t showin’ Rocky IV for another 45 minutes.”

The Beatles, Sept. 2, 1964
Ain’t got no actual verification, but my ma says yours truly got conceived on this night. Coulda been before, during or after the show. She don’t really remember.

The Nazz, Oct. 19, 1969
First concert I ever seen. I was four years old, and my old man took me. He got thrown out for punching Todd Rundgren in the thigh. This marked the first time I ever smoked a cigarette and drank more than two Schmidts in one sitting. God, I miss you, dad. When you get out of the butt hut next week, drinks are on me.

Robert Hazard And The Heroes, Aug. 10, 1982
Most of youse Philadummies don’t know it, but there was a time when the late, great Robert Hazard was the coolest thing this side of the Schuylkill River. He could probably go into any bar in town, go, “Yo, gimme a Yuengling for free,” and they’d go, “Yo, OK.” This show took place between a Phillies/Pirates doubleheader. I was on ’shrooms and ran onto the field and started playing air guitar with one of ’nem miniature baseball bats. Only problem was they was still in the middle of the first game! Everybody was yelling at me, especially Phillies’ catcher Bo Diaz. What was his problem? He ain’t even from here! I got arrested later on for takin’ a whizz on the Phillie Phanatic.

Agnostic Front, Flag Of Democracy, McRad, Nov. 3, 1983
When I saw a poster for this “hardcore” show on the way home from my job at Jim’s Steaks, I thought it was for a live sex act, which was then and still is totally up my alley. The poster also said “New York vs. Philly Showdown” and listed some bands I never heard of. Man, I hate New York even more than I love live sex shows, so needless to say, I was in. The music sucked donkey, but I loved the slam dancin’. It was awesome ’cause I could finally fight at a concert and not get thrown out … or so I thought. Turns out punkers have this thing called “pit etiquette,” which means you can’t hit nobody in the face with no wrench.

Live Aid, July 13, 1985
What a magical day that was, huh? I took my hatred of all things non-Philly to new heights by only facing the stage for Philadelphia residents the Hooters and Patti LaBelle. Everyone else got my back. On the Live Aid DVD, you can totally see me whippin’ a Tastykake Krimpet at the Thompson Twins.

Philly Boy Roy is a frequent guest on radio program The Best Show On WFMU and can be found at www.scharplingandwurster.com