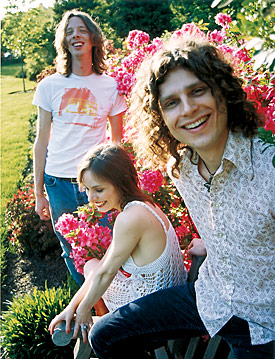 Equal parts Rocky and the Replacements, MARAH gained fame as the gritty roots-rock band that recorded its debut above an auto-repair shop and signed to Steve Earle’s label. The Stephen King-endorsed Marah even called its second LP Kids In Philly. But grand ambitions to become the world’s biggest band led brothers Dave and Serge Bielanko to Wales in 2001, where Marah recorded with Oasis producer Owen Morris. The result? Float Away With The Friday Night Gods, a fart heard ’round the world.

If you were a musician in Philly around the turn of the millennium, you may have spent time in the melancholy orchestral-pop carousel known as MATT POND PA. Singer/songwriter Pond moved to Brooklyn in 2003 and upgraded to more concise, upbeat guitar pop on 2005’s Several Arrows Later and 2007’s Last Light. Well done, Pond. But the “PA” in the band name? Give it back.

BURNING BRIDES (pictured) broke out in the Strokes/Hives/Vines “return to rock” era, circa 2001. The Brides, though, made a return to grunge, a genre that hadn’t been gone long enough for anyone to really miss it. Still, the band led by singer/guitarist Dimitri Coats and girlfriend/bassist Melanie Campbell had knockout metallic riffs that landed it a deal with V2. Flush with success, the Brides moved to Los Angeles in 2004 to deal with drug habits and the dissolution of their record label.