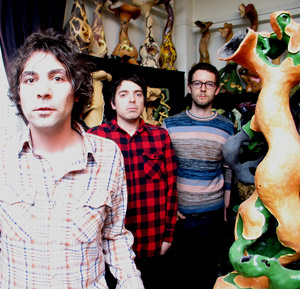 Despite the title of the War On Drugs’ debut album, Wagonwheel Blues (Secretly Canadian), there’s nothing ranch-hand cowboyish or bluesy about the Philly outfit. That doesn’t mean the trio isn’t down and dirty. It’s just that Wagonwheel Blues is as filled with freewheeling, Dylanesque Americana as it is with Smiths-like Britpop and Brian Eno-style percolating electronic swells.

“Taking The Farm” from Wagonwheel Blues:

“I didn’t have a title for the record, and it was just a lyric and image that kept crawling back into a lot of the songs here and there,” says frontman Adam Granduciel, who started the War On Drugs with guitarist Kurt Vile in 2003. “I was putting together the art for the album, looking through years of Polaroids and Super 8 stuff, trying to sequence the album with all this in mind. I kept seeing all these colors in the songs and on the page, in the pictures and in the tones, like the ultimate Diebenkorn painting. [The wagon-wheel imagery] seemed to reference both how the album was made and also certain connotations within the history of American music.”

While Granduciel brings a chiming, treble-kicked guitar and an unnerving sense of unpredictability to his other band, the Capitol Years, his pairing with Vile is the crucial element in the War On Drugs.

“We’re definitely great studio partners,” says Granduciel of Vile. “By the time we started recording the Drugs’ stuff, we’d been playing for so long and had been through a lot of shit together. Everything just fell into place.”

Granduciel’s lyrics, too, fell right in line. While “Arms Like Boulders” comes from Nietzschean ideas and images he had while touring the West Coast (“We were reading Corso, Ferlinghetti and Miller; you know, the type of stuff you read in California”), “Taking The Farm” is all fuzzed-out and folky, with lyrical leaps into unbridled Springsteen-heartland territory.

“‘Farm’ definitely has the dryness of early Bruce records,” says Granduciel. “But when you throw in another two drum sets and filters on everything, you start creeping out of the edges.”

Ultimately, the War On Drugs’ crotchety sound is as inspired by the band members’ surroundings as their literary and musical influences.

“I moved into a run-down part of town five years ago,” says Granduciel. “My Puerto Rican neighbors, a family of six, loved it when we practiced. They’d be dancing on the sidewalk to a bunch of drones and synthed-out guitar leads. That was an inspiring time for me and Kurt, playing until 3 a.m., four nights a week. It’s amazing how much those things actually rub off on the music.”