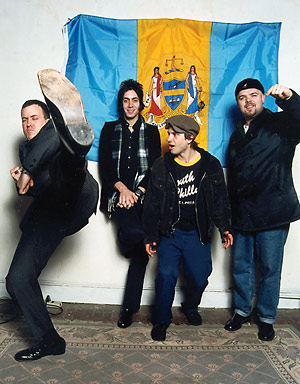 Somewhere between Jon Spencer’s trash-rock blues and the Make-Up’s R&B fakeout was the Delta 72, Philly’s sometimes brilliant, sometimes hucksterish soul-garage outfit. If you weren’t there for the tent-revival exhortations that charismatic singer Gregg Foreman performed onstage at America’s whitest rock venues, you missed it. But you can hear the Delta 72’s engine purr on the three albums the band issued on Touch And Go from 1996 to 2000.

For years, Foreman gave Philadelphia a questionable-yet-entertaining rock-star spectacle. Sporting a Ron Wood-style rooster haircut, Foreman became famous for walking around town with a switchblade in his boot; in 1997, he got into a fistfight with Spencer, who subsequently invited the Delta 72 to tour with the Blues Explosion.

Where are they now? Foreman moved to Miami, got clean and sober and tours in Cat Power’s Dirty Delta Blues Band. Keyboardist Sarah Stolfa, one of the surliest waitresses at Center City dive bar McGlinchey’s, turned the job into high art: Her images of bar patrons won the New York Times Magazine’s photography contest in 2004. Drummer Jason Kourkounis went on to play in Hot Snakes, Burning Brides, Bardo Pond and the Night Marchers.