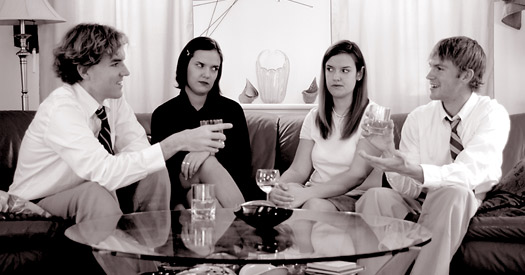 A Sunny Day In Glasgow may be the closest thing that Philadelphia has to a blog band (perhaps with the exception of Philly/Brooklyn’s Clap Your Hands Say Yeah). “The Best Summer Ever” from The Sunniest Day Ever, the band’s 2006 debut EP, caused a justifiable stir among those looking for an unknown to claim as their own: It’s a shimmering, sunny update of Cocteau Twins/My Bloody Valentine dream pop with a joyful melody, and it’s so densely saturated that everything—the soprano voices, the reverberating guitars, the processed drums—seems mixed at an equal level.

“The Best Summer Ever” from The Sunniest Day Ever:

“I was completely taken off guard by the response to the EP,” says frontman Ben Daniels. “We didn’t even exist as a band at that point, and people were asking us to tour and labels were emailing and calling us. It was very surreal, and in retrospect, it’s probably a shame we didn’t exist as a band at that point. But after that, I kind of thought people would not like the album that much because it wasn’t as poppy as the EP was.”

Scribble Mural Comic Journal, the full-length that followed in February 2007, expanded on the EP’s promise (literally—it included most of it) by blending focused and catchy tracks (“5:15 Train,” “A Mundane Call To Jack Parsons”) with abstract, electronic reveries (“No. 6 Von Karman Street,” “Panic Attacks Are What Make Me Me”). The band quickly followed Scribble with the Tout New Age EP in July ’07 and is currently finishing its second album, tentatively titled Ashes Grammar and slated for May.

“I think the only stable thing about this band is me,” says Daniels of his group’s fluctuating personnel. He originally drafted his twin sisters Lauren and Robin as vocalists for the ironically named A Sunny Day In Glasgow. Their voices are simultaneously seraphic (clear, floating, high) and human (imperfect, introspective), and they juxtapose perfectly with their brother’s wall-of-soundscape arrangements. Lauren relocated in ‘07 but Robin remains a member, and a core band has been working on the new record. Daniels is hoping to solidify a lineup to be able to tour when then new album arrives.

Of the new LP, Daniels says, “I had lots of plans for this record and none of them have worked out, really. It’s also taken three [more] months to finish than it should have. We recorded almost everything in this big dance studio, so there’s a lot of ‘roomy-ness’ to the record. There’s lots of synths and electric drums and samples. In terms of the songs, I think it’s the least poppy thing we’ve done yet. Hopefully everyone won’t hate it.”

But that’s what he thought about the last one, so there’s little cause for concern.