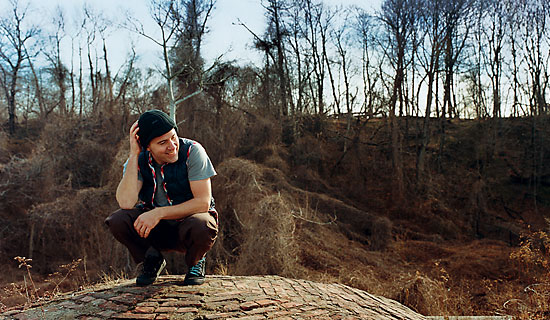 Even when he was in his late 20s, Jason Lytle—about to turn 40 in March—seemed old for his time. The burden of being the only songwriter/main creative force for indie-rock cult faves Grandaddy seemed to weigh heavily on him. Since dissolving the band and moving to Bozeman, Mont., a few years ago, Lytle seems much happier, at least on the phone. He loves mountain-biking, still skateboards and goes on long hiking treks into the wilderness, things he couldn’t do so easily when he lived in Modesto, Calif. Montana’s climate certainly fits Lytle’s clothes. Now that he’s signed a record deal with respected Los Angeles label Anti- for his debut solo album, Yours Truly, The Commuter (due out May 19), he can continue to do what he does best: write some of the most appealing songs of the last 15 years and, hopefully, avoid the pitfalls of his earlier musical experiences.

MAGNET spoke to ex-Grandaddy frontman from his Bozeman residence. Lytle will be the guest editor of magnetmagazine.com all this week. Check back for his daily posts on favorite music, film, literature and more.

Grandaddy’s “Nature Anthem” from 2004’s Artist’s Choice: Below The Radio:

Just one background question, Jason: Did you do any fornicating last night?
[Laughing nervously] What? No, I didn’t. But I’m kind of hungry, so I might be a little edgy.

You haven’t seen Frost/Nixon, obviously. So, why did Grandaddy really break up?
It just lost its flair. There’s a whole lotta fucking reasons. I think our time to make it came and went. Some guys in the band would have been OK with just continuing to do it, for the sake of having fun and partying. Touring is not really my element, the big traveling circus thing, not being able to dictate your schedule. I’m a lot more like a wild animal in that respect. It went against my natural instincts. I tried to compensate in negative ways, physically and mentally.

And you were the band, at least when you recorded the albums. That’s a lot of pressure.
I don’t know. They were my songs. The whole band thing started out with me being the bedroom four-track guy. I saw it grow in little ways and knew the next step was going to require me to put a band together.

Would you say you’re a perfectionist?
[Laughs] As well as I can be, I guess, within the framework of my ability. Anybody who knows half a shit about music would have a hard time imagining that I’m a perfectionist.

How do you feel now about the move to Montana?
It’s pretty nice right now, toddling between 40 and 50. It’s clean and bright and there’s snow on the mountains. [In Modesto], the pesticide and the dust from all that agriculture was really bad. I almost completely got rid of my allergies just by moving here. It was a good trade-off.

You’ve used artificial triggers in the past for creating music: drugs, booze.
Who knows where I would have ended up? I was running out of things. It’s the old bait and switch, tricking you into thinking it’s a good idea. It ends up being completely non-productive, and then you’re just fucked because now you’ve got this whole brand new problem.

Tell me how you can play the piano but have managed to avoid learning how to type?
I was of that mind in school that I didn’t want to be doing one ounce more than I needed to be doing. The whole time, I just thought I’m gonna wind up working in a fucking warehouse. I was a certified fork-lift operator for a couple of jobs I had.

How does it feel, being on the same label as Nick Cave, Solomon Burke, Johnny Cash, Marianne Faithfull, Neko Case and Ramblin’ Jack Elliott?
Yeah, I’ve gotta start working on my Christmas-dinner invitations. I’d always heard Ramblin’ Jack’s name but was not familiar with his stuff. But I just got his new one and I really fucking like it. I didn’t know where he fit in, if he was some hippie cowboy.

I saw you slated recently to play at San Francisco International Airport, for ticketed passengers only. Did you do it?
Yeah, and it was great! The best part about it was that I hadn’t seen Aaron (Burtch, Grandaddy drummer) in over two years, and I asked him if he’d play that thing with me. I was kinda sheepish, halfway expecting a “who the fuck do you think you are?” email. But he was like, “Yeah, that sounds like fun.” We met up at the airport, gave each other a little hug, and within 40 minutes we were clicking off to the first song. It went about as good as I could have imagined. A lot of it was just me being totally taken by the fact I was having such a good time playing with him. A super big bonus to the whole thing was that I’d been in L.A. the day before because these guys are making a video for one of the songs on the album. I asked them if they wouldn’t mind coming up here to film the airport thing, with an emphasis on the crowd, the people walking by. They’ve already sent me footage of one of the songs and it’s so good. They really got the essence of the weirdness of it, people coming and going. People on layovers were sitting on the ground, watching, airport employees and car rental people were walking by. And there were actually some Grandaddy fans who happened to be at the airport.

I assume you will play some live dates for the new album.
There’s gonna be fucking touring. I’m trying not to even think about it. It’s gonna happen, but it’s gonna be done in more of a quality manner. I’m just gonna do as much as I need to do.

Hey, you looked like you were having a pretty good time with that living-room-couch format when I saw you play the Hotel Cafe solo in L.A. in the summer of ’06.
Yeah, it’s gotta look more like that. The lineup would be myself, Aaron and this bass player from Bozeman, Rob Murdock, one of the main guys I skateboard with up here. And there’s my friend Rusty Miller, a bit of a multi-instrumentalist, who was up onstage with me that night in L.A. I’m super comfortable with him.

Are you happier now than you were at the end of the Grandaddy era?
With Grandaddy, I was just barely keeping my head above water. When I wasn’t on tour, I was recovering from tour. All I wanted to do was be left alone. I’m actually enthused about stuff now, and I get ideas and get excited about them. I’m still cranky and an asshole to the people that I love. But there’s a lot more positivity surrounding me, and it’s rubbing off on me in good ways.

3 replies on “Q&A With Jason Lytle”

[…] the second day in a row, Jason Lytle has taken Magnet magazine’s website hostage, yesterday speaking to Eric Miller about the new record (Yours Truly, the Commuter – out May 19), why Grandaddy really broke up and […]

Actually, Jason spoke to Jud Cost, not me.

Hey Jay! Remember me, Donnie? I used to hook you up with those tapes you liked. You used to sit around for hours, I mean hours (did you even know the time was passing?), watching secret camera footage of people squeezing fruit at grocery stores. First it started with oranges, then grapefruits, but you didn’t stop there did you, Jason? By the time you got to pomagranates and kiwis, you became a different person, and that is when I decided to eject. I just couldn’t contribute to your obsession any longer..