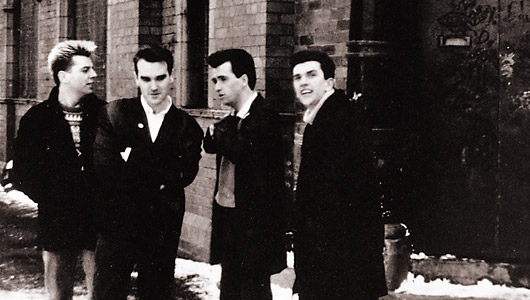 Let’s catch up with the Salford lads:

Morrissey (vocals): The ex-Smiths frontman is currently “blitzing” his fanbase with “Everyday Is Like Sunday,” which appears in NFL Network commercials. New album Years Of Refusal (Attack/Lost Highway) is due February 17. U.S. tour dates here.

Andy Rourke (bass): Earlier this month, Rourke accepted a job as head of A&R for The MuseBox, a New York/Toronto-based music marketing company. The firm’s clients include Echo & The Bunnymen, Dr. Dog, the High Dials and, uh, Less Than Jake. Rourke was last seen playing in Freebass, a multi-bassist outfit with Peter Hook (New Order) and Mani (Stone Roses).

Johnny Marr (guitar): The best Smith. Maybe we’re biased. Not quite sure what to make yet of his village-bicycle status as a member of Modest Mouse and the Cribs (and previously of the Pretenders, The The and others). All we want is for the man to find a real songwriting partner again. Why wasn’t Electronic—Marr’s duo with New Order’s Bernard Sumner—better than it was? Marr will appear on several tracks on the upcoming Pet Shop Boys album Yes, due in March. Look at all his guitars!

Craig Gannon (guitar, bass): The fifth Smith! You thought we wouldn’t go here. We have. Originally drafted into the band as a bassist in 1986 when Rourke was temporarily exiled due to drug problems, Gannon (formerly of Aztec Camera) continued in the band as a touring guitarist. He is currently a prolific composer of theme music for British television shows and documentaries.

Post script: It’s highly recommended that old and new fans pick up The Sound Of The Smiths, a compilation that Rhino quietly issued in November. There are one- and two-disc versions; get the latter. While we’ve long complained that Morrissey is the worst abuser of the best-of release (he has three of them, not counting singles compilations and other collections), The Sound Of The Smiths is notable because of the remastering (supervised by Marr) of the songs. A huge boost is given to the bass, the drums on “Bigmouth Strikes Again” are leveled out, and the Peel Session version of “What Difference Does It Make?” is its finest take. It’s oddly light on material from Strangeways Here We Come (no “Paint A Vulgar Picture”?) but at any rate is now the only Smiths collection worth owning.

To read the chapter about the Smiths we excerpted from 2006’s Rob Young-penned Rough Trade: Labels Unlimited, click here.

“What Difference Does It Make? (Peel Session Version)” from The Sound Of The Smiths:

One reply on “Keeping Up With The Smiths”