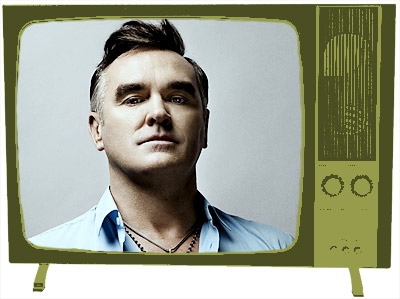 Jimmy Kimmel Live (ABC): Morrissey
No offense to Sarah Silverman’s ex, but first reaction: Why is Morrissey doing this junior-varsity late-night show? According to this fan site, it’s actually part of a live outdoor mini-concert in Los Angeles. The obvious joke about a Morrissey “mini-concert,” of course, is how blink-of-an-eye brief that show would be for the 45-minute wonder.

Late Show With David Letterman (CBS): Mark Olson & Gary Louris
The reunion of these two ex-Jayhawks resulted in a recent album, Ready For The Flood. We were hoping for a dramatic storyline to be revealed about the Jayhawks’ breakup, but none seems to be forthcoming from this mild-mannered alt-country camp. It’s like if the cast of Northern Exposure got back together.

Morrissey’s “I’m Throwing My Arms Around Paris” from Years Of Refusal:
https://magnetmagazine.com/audio/ImThrowingMyArmsAroundParis.mp3