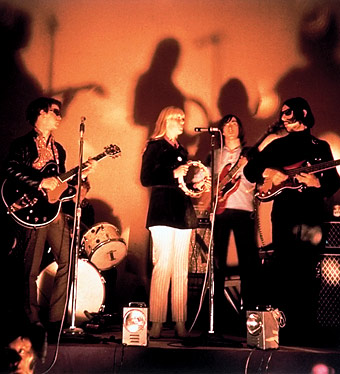 The final song to be recorded for the Velvet Underground’s debut LP—added almost as an afterthought in an effort to inject a tune with radio-single potential (to the point where the final master tape of the album shows the song penciled in as the lead track, as though tacked on at the last minute)—“Sunday Morning” is the perfect summation of the morning after the night before. From its pioneering use of bell-like celesta (a keyboard instrument that sounds more like a twilight xylophone) to Lou Reed’s pitched-up, almost feminine vocal track, it remains the most pop thing in the VU catalogue and stands in stark opposition to a record otherwise marked by tales of drug abuse, sexual deviancy and observations of Warhol Factory tragedies-in-waiting (e.g., actress and “Femme Fatale” Edie Sedgwick). “Sunday morning/Brings the dawn in/It’s just a restless feeling/By my side:” Sleep this one off, Holmes. Monday’s just around the corner.

One reply on “Eight Days A Week: The Velvet Underground & Nico”