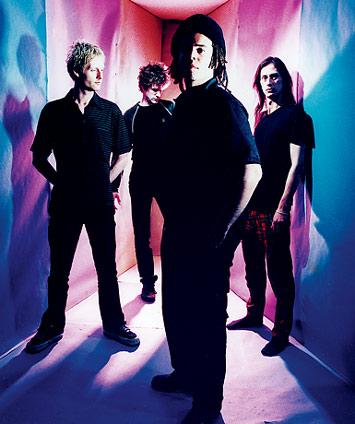 Too heavy and aggressive to fit in with its native army of blissed-out shoegazers but too polished and spacey to blend with American modern rock, Oxford, England’s Swervedriver never rose above cult status. Despite most of its albums now being out of print in the U.S., Swervedriver’s influence can be heard in any number of current post-post-shoegaze outfits that use their effects pedals to conjure the hard-edged menace of the Stooges rather than the orchestral comfort of My Bloody Valentine. After losing two members following a 1992 tour, singer/guitarist Adam Franklin could barely assemble a complete Swervedriver lineup in time for the Mezcal Head sessions. This sophomore album was a cohesive collection of churning, widescreen epics obsessed with mystery, murder and motor-driven chaos. Though “Duel” was the closest thing Swervedriver had to a hit in the States, “Last Train To Satansville” was nearer to the album’s heart, a violent noir odyssey resting somewhere between Raymond Chandler and Hunter S. Thompson. Dark and often beautifully dissonant, Swervedriver’s mix of melodic space pop and mind-scrambling noise held appeal for two distinct audiences but seldom found either.

Catching Up: Beset by a flurry of label troubles with 1995 follow-up Ejector Seat Reservation (unreleased in the U.S.), Swervedriver finally called it a day following 1998’s disappointing 99th Dream. Franklin has issued a handful of records under the name Toshack Highway, collaborated with Interpol’s Sam Fogarino as Magnetic Morning and will release his second solo album, Spent Bullets, in March. Drummer Jez Hindmarsh recently published Rider, a memoir of life on the road, and he now manages and produces/records bands. Swervedriver reformed in 2008 for a tour, and Mezcal Head and 1991’s Raise were reissued earlier this year. Download live compilations of all four Swervedriver albums here.

Thanks for letting the world know what they might be missing out on! The reissues make Mezcal Head sound better than ever imagined.

I beg to differ with your assessment of “99th Dream”. Sure, “Mezcal Head” is great, but Swervedriver was a rare breed that improved on every album. I think “99th Dream” is their best!

Mezcal Head is in my top five favorite albums of all time – thanks for giving it some love!
Incidentally, I’ve seen both Swervedriver and MBV live a few times now and MBV are the harsher, noisier band – no “orchestral comfort” there. Maybe they toned it down a bit for Loveless, but that’s about it. The principal difference for me is in the lyrics. I love both bands, but there’s just more substance in Swervedriver’s songwriting.

first time i knew about Swervedriver was this Mezcal Head album. how i was amazed, shocked, and intrigued with their music! a hidden gem at its best!!

saw them at the Detroit show where they lost their drummer in 91. my first real gig. fuck i’m old.
These guys were incredible and this album was one of the best rock record of the early 90s.

saw both MBV & SWD in 2008. was a dream come true, having my two favorite bands reunite in the same year…mezcal head never gets old. a must have for any car ride….& 99th dream was not a disappointment. i think that’s a great record, better than ejector seat reservation even…

Check out a podcast review of Swervedriver’s Mezcal Head at digmeoutpodcast.com, a weekly podcast dedicated to reviewing lost and forgotten rock of the 90s.

Agreed that 99th Dream is a worthy entry in the canon..different to be sure, but saturated with Swervedriver essence…memorable melodies and the occasional explosion. If you like the band, you’ll like that release.