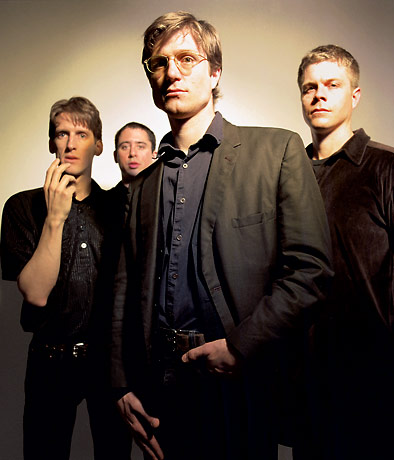 Unfairly pegged as a junior-league Pavement, Chicago’s Number One Cup distinguished itself from other genre coattail-riders by rocking a little harder and being just a tad more artsy-fartsy. The quartet’s Wire-loving core members—Seth Cohen (guitar, keyboard, vocals), Pat O’Connell (ditto) and Michael Lenzi (drums, vocals)—dialed down some of the overt slack-rock moves on sophomore effort Wrecked By Lions, amping up the power and refining the pop to magnificent effect.

Catching Up: After the release of 1998’s excellent People People Why Are We Fighting?, Number One Cup disbanded. Cohen and Lenzi played together in both X-Vessel and the Fire Show; Lenzi issued three EPs and one full-length as Resplendent; and O’Connell unplugged to a new career as an acoustic fingerpicker.

10 replies on “Lost Classics: Number One Cup “Wrecked By Lions””

Let’s be honest. It was the mid-90s. We were young and impressionable. We made a record that sounded like a bunch of other records we were listening to at the time. We came clean about it even then, confessing we were products of our record collections. We may have had a knack for hooks, stabby guitars, and experimental decorations, but frankly, Wrecked By Lions is nothing more than a good, middling, indie album.

When the time for my deathbed accounting comes, I’ll put the first (self-titled) and third (Saint The Fire Show) albums I made with Michael Lenzi in the Fire Show at the top of the ledger sheet. But they went more or less unnoticed. They were too weird at the time, too far outside any easily identified and named category.

If someone wants to dig up a couple of albums that were truly lost and quite possibly classics, skip Wrecked By Lions, get a real good shovel, and see if you can unearth copies of The Fire Show and Saint The Fire Show.

-Seth Kim-Cohen (Number One Cup and The Fire Show)

C’mon Seth, it’s good. Really good actually. There aren’t a lot of albums I lbought in 1997 that I still put in rotation a few times a year. You’re in good company. I listen to this as much as Brighten the Corners (although less than Built to Spill’s Perfect From Now On). What else from 1997 stands up? Elliott Smith put out a good one in ’97 I guess. Spiritualized too, Modest Mouse put out their last album that didn’t suck. I can’t listen to YLT’s I Can Hear the Heart Beating as One or Homogenic anymore. Face it, this one stands the test of time.

How weird that I should come across an old post that someone else just posted to also.

I agree with Seth, Wrecked by Lions is just ok. What this band will be rememberd for is the Chicago classic Strange and Silent Staircase. It is one of the great songs from 1990’s Chicago and should not be missed.

I would say possum trot plan is a true classic. it’s easily one of my favorite albums of all time, some odd little diddies on there, but really only completes the charm of that record. “wrecked by lions” is a descent album, “people, people…” is pretty great, and everything the fire show did was brilliant, saint the fire show is a masterpiece.

Wrecked By Lions is a true classic. I was a huge pavement fan from the beginning but when this record came out Pavement had lost me and Number One Cup had won me over. I’m trying to find somewhere I can download it from now. I have the vinyl but no record player set up at the moment and I want to hear it. Great record Seth, where can I find The Fire Show stuff?

Check my web site http://www.kim-cohen.com All the Fire Show albums are there. I’ll get the Number One Cup (including Wrecked…) posted soon. Knowing you’re looking for it might motivate me.

Thanks Seth, that’s awesome, I really appreciate it. Checking out the Fire Show stuff now. Wrecked By Lions is definitely in my top 20 indie albums of the era. It’s a great record, I was just telling a coworker about it the other day, that’s why I was trying to download it. I need to get a turn table set up. Cheers man, from one songwriter to another, thanks!

I am a huge fan of all 3 number one cup full lengths. Wrecked by Lions still gets plays on my stereo, that’s for sure.

Seth, thanks for posting here as it’s awesome to get some info from the actual people who made this amazing music.

My thoughts about Number One Cup and The Fire Show are that they are 2 separate entities. Those that are more pop-minded are going to prefer the Number One Cup stuff and those that might be into more “angular” art rocky stuff might go for The Fire Show. I personally enjoy anything Michael Lenzi sings on so I am a supporter of both!

I will listen to Fire Show but Possum Trot Plan is still in my rotation – a classic. Wrecked is almost as good. (And lots from ’97 stands up: Tone Soul>Ok Computer>Dig Me Out>In it for The Money etc. Even Bowie put out a good one in ’97).

I still love this album. OK it sounds like a lot of records from that period but few were that good. Most of the songs from this LP are good – some are excellent – pop songs. I know several of my friends who still listen to it on a regular basis, 16 years after its release. It’s a pretty good indicator that those songs have stood the test of time.