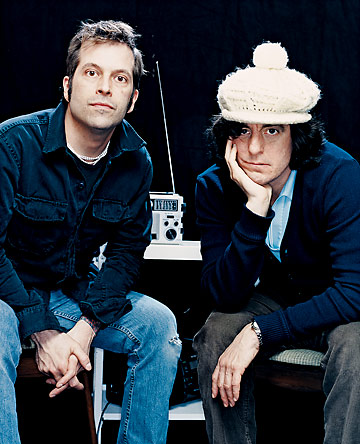 Wheat—the New England wobbly-pop duo of Scott Levesque and Brendan Harney—is reissuing its first two albums (1997’s Medeiros and 1999’s Hope And Adams) in a three-disc package. Along with the two full-lengths, a 16-page booklet and limited-edition signed poster (for pre-orders only), a third disc of rarities titled 30 Minute Theatrik is included.

“We made the third disc its own program,” Harney tells MAGNET, “flowing very much like we’d try and make a record flow. Rather than just throw some songs on the end of each record, it has its own oddly part real/part made-up vibe.”

In addition, Harney revealed some details on Wheat’s upcoming fifth album, White Ink, Black Ink. The late-spring/early-summer release will be on the Rebel Group, a label run by Thaddeus Rudd (of Wheat’s ’90s-era label, Sugar Free). “[White Ink is] very different from the last [album],” says Harney. “It’s much simpler, much more honed down, much harder-hitting. I think this is our best record to date. Very confident, very pop, but very Wheat.”

Wheat will be appearing at SXSW with a new live lineup that includes, according to Harney, a device/person known only as “robot.”

MAGNET tooled around picturesque New England small towns with Wheat in 2007 and got the whole story on the band’s music-biz ride on the rollercoaster that John Mayer built. We also had some excellent Portuguese kale soup. Read the article here.