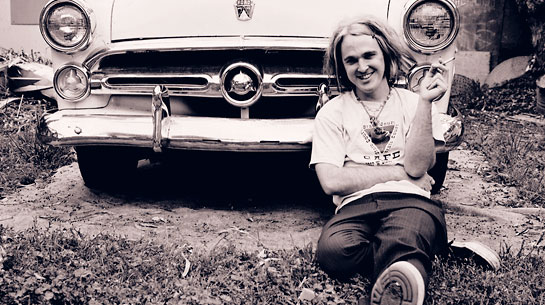 :: CAUSTIC RESIN
The Medicine Is All Gone // Alias, 1998
Was it irony? At a time when classic rock was definitely not hip, Boise, Idaho’s Caustic Resin came out swinging the hammer of the freedom-rock gods with the strength and resolve of seven Melvins. Led by former Built To Spill member (and Charles Manson look-alike) Brett Netson, Caustic Resin peaked with third album The Medicine Is All Gone, a soundtrack for your next heroin withdrawal. From ringing power-riff opener “Cable” to a cover of Argent’s “Hold Your Head Up,” Medicine reeks of damaged lives and desperate situations. Was all this drama real? MAGNET reached Netson by phone for a 1998 interview at a drug-abuse treatment facility.

Catching Up: Caustic Resin’s last album came out in 2003. (Ironically, it bore the title Keep On Truckin’.) Netson has toured as a member of Built To Spill and Mark Lanegan’s band and formed Reversion, a psych-noir duo with classically trained marimba player Erin Jorgensen.

One reply on “Lost Classics: Caustic Resin “The Medicine Is All Gone””

[…] CAUSTIC RESIN Caustic Resin played their first show opening up for Methods of Dance in the gym at the YWCA. Tom apologized in between every song for how much they sucked, but they didn’t suck at all. Pete Weaver and I sat in the room trying to process what we were hearing. Was it punk? metal? psychedelic? classic rock? none of the above? all of the above? I loved it. We made their first record “Body Love/Body Hate” at the Audio Lab and the stories about those sessions could fill many novels. Like running a mic out into the parking lot to Brett’s van so he could rev it up at the right time to give the climactic point of a song more……just more. Or the guys out in the parking lot fighting, James was swinging his cymbal stands at Brett and Tom while they were yelling at each other. I was inside, playing a riff on the piano that they had been working on. Suddenly they stopped fighting, heard what I was playing, came running back in the studio, picked up their instruments and started jamming again as if nothing had happened. That track became “Cocktails” on the album. Caustic Resin had a reputation of being the best and worst band you’d ever seen in your life, often times within the same song. Beautiful chaos seemed to follow them wherever they went. Seeing them again should be epic. “Lost Classics” article on Caustic Resin in Magnet Magazine in 2009 […]