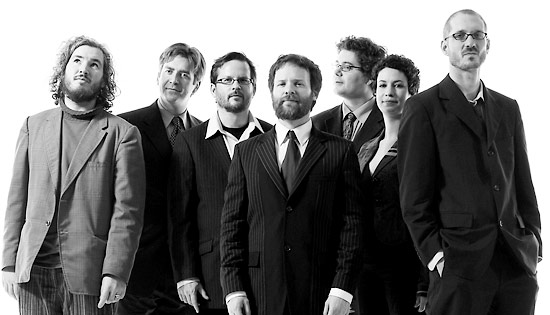 Rock Plaza Central has finished its follow-up to Are We Not Horses, the Toronto band’s elaborately plotted, immaculately conceived 2007 concept album about a mythical celestial war and the self-aware metal equines that wage it. Now, if only its author can remember the new album’s title.

“It’s so long that I forget it,” admits Chris Eaton, RPC’s deep-voiced frontman. “I found a painting online that I thought really captured the same emotions that I was thinking of when writing the record. It had a name written on the painting, so it made sense to use it as the title.”

A couple minutes later, Eaton’s nabbed his quarry. “I have it now: If Only They Could Turn Around … ” He pauses. “Are you writing this down? Comma … They Would Know They Weren’t Alone.” (Eaton has since informed MAGNET that the title is a working one; he’s also considering At The Moment Of Our Most Needing.)

So it’s no When The Pawn…. But this third LP promises to have the same intensely literary bent that made Horses such an engrossing listen. Whereas the last album sprang solely from the depths of his imagination, Eaton—who is also a novelist, and whose 2004 book The Inactivist was taught alongside Horses in a graduate English course at the University of South Alabama—says the new one was heavily inspired by Faulkner’s Light In August.

“(Don’t You Believe The Words Of) Handsome Men” (download):

“There’s some lyrics lifted directly from that story,” he says. “One of the main plot lines is this young girl; she’s convinced by this guy to have sex with him. They’re having an affair and she becomes pregnant, so he takes off: ‘I’m going to the next town to find a job. I’ll send for you when I’m all settled.’ So she, at eight-and-a-half months pregnant, goes off to find him. I don’t think she has shoes, even.”

Horses deftly toed the line between a Dust Bowl-era country/folk road show and more modern, damaged rock brainiacs like Neutral Milk Hotel. Early mixes of the new album reveal some fresh weapons in RPC’s arsenal: “Oh I Can” is steadied by a walking bass line a la Broken Social Scene, and Spanish trumpet climbs like a minor-key vine around the start of “(Don’t You Believe The Words Of) Handsome Men.” One thing that hasn’t changed is Eaton’s punishing singing, a strained vocal register he sometimes pushed to the point of self-flagellation on Horses. Eaton says to expect even more hoarseness on the new LP, which is currently being shopped to labels for an expected summertime release.

“I’ve been told by our bass player (Scott Maynard) that if I continue to sing the way I am on this album, then I will be doing myself irreparable damage,” says Eaton. “The last song on the record really came about from a riff. Like, ‘I want this to be huge! I want this to be played on, like, classic-rock stations!’ Or something. Again, it’s got weird violins, and it’s based around a banjo/mandolin combination, so it’s not likely to be played [on the radio] anytime soon. But I’m way beyond my range in the screaming. I want it to be a classic-rock song, so I’m trying to be all loud and scream-y. And I love it.”