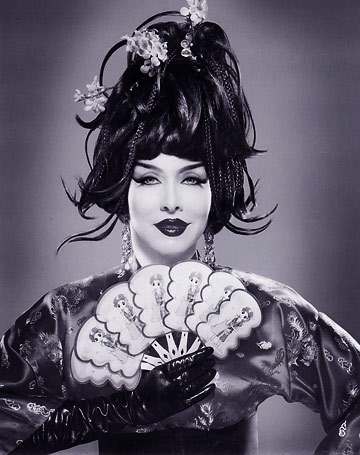 Most people remember Josie Cotton as the adorable new-wave princess in the prom scene of 1983 cult classic teen film Valley Girl, singing “Johnny, Are You Queer?” Cotton wrote all about the celebrity and controversy that followed in the wake of “Johnny, Are You Queer?” for MAGNET in 2006. (Read the piece, which garnered an honorable mention in 2007’s edition of Da Capo’s Best Music Writing Series.) Cotton hasn’t returned to the pop-music charts since the ’80s, but she’s continued to write songs, work with artists (via her Satellite Park studio in Malibu, where Elliott Smith recorded his final album) and partake in pop culture’s more interesting shadows. Her latest album, Invasion Of The B-Girls, consists of covers of songs from the campiest, best/worst b-movies of the ’60s and ’70s. Each day this week, Cotton will write about some of her favorite b-movies for magnetmagazine.com.

MAGNET: Thanks for writing about b-movies—you did a great job. I know you wrote the “Johnny, Are You Queer?” piece for us, but how much writing have you done?
Josie Cotton: It’s funny, when I wrote that piece, it was because I needed a bio and I didn’t want anyone else to write it. So I just started writing out what happened and discovered I have an affinity for it. I amuse myself terribly. I had a small background in comedy; I had a comedy radio show back in Texas with a girlfriend of mine that I wrote the material for.

What was the radio show like? Like a sketch-comedy program?
Yeah. It was an hour-long program on a college station called The Cha Cha & Uva Show. We were on right before the Black Panthers.

Who are almost never funny.
One time my partner went up to the guy who was in full-on military (garb), and she went, “Nice tan.” The room froze, and then he started laughing.

Were you like Axl Rose in the “Welcome To The Jungle” video, stepping off the bus in Hollywood?
[Laughs] It was, kind of. My friend—the one I had the show with—she and I drove out, kamikaze style, drove all night and came to Los Angeles. I didn’t know anything. I was pretty unworldly.

You already wrote the story behind “Johnny, Are You Queer?” but I wanted to ask how you got hooked up with Bomp! and (label owner) Greg Shaw.
Before that, I had a deal with a label called MSR Records. The label folded before the record came out, so Bomp! came along and wanted “Johnny, Are You Queer?” Greg Shaw understood what the song was about. He got publicity that was just unbelievable, around the world. Elektra signed me because I had this massive hit on KROQ, but they became very afraid of the song and killed it. They absolutely pulled it.

Because of the word “queer.”
Yes. They were frightened of the word. (The next single), “He Could Be The One,” was actually a bigger hit for me, because people could actually hear it on the radio. At one point, they approved (“Johnny”) for AM radio if there was a beep: “Johnny, are you beep.” Which would’ve been funny. Bomp! probably would’ve been a better choice than Elektra at the time, but that’s one of the mirages for a musician: a contract with a big record company. Of course, it’s almost completely obsolete and extinct at this point. As you know.

What do you actually remember about being on the set of Valley Girl?
I met all the other actors. Um, I remember my producer at the time, Larson Paine, did not want me to do this movie. He kept hanging up on the director. I didn’t know who Nicolas Cage was. I think it was his first movie. He asked me on a date, and I said no. One of the other actors asked me if my boobs were real. I pretended not to hear. But it was basically a friendly cast. I didn’t know it was going to be a movie that lingered endlessly. For so many guys now in their 30s, that was a coming-of-age movie for them. I always thought it would (appeal) more to girls. But I guess the plot about the outcast, artistic guy who had a shot at being considered cool connected more with the guys.

Did Larson not want to do it because it was a teen/pop-culture movie based on Valley girl catchphrases?
He was just very suspicious. I thought it would be fun. The music in that movie was just indicative of the time. I used to make fun of it, but it’s all right. I might have been totally forgotten if not for that movie.

You basically went on hiatus from music after (second album) From The Hip in 1984, and that was a consequence of things going wrong with Elektra. But you knew people in the punk scene in L.A. Why not keep making music?
I kept making records. I loved the process of recording and being in the studio, but as soon as someone would mention they wanted to put a record out with me … even Jimmy Iovine was leaving me messages. He was a huge guy at that time. It was almost a physical reaction. To be totally corny and honest, it was a heartbreaking experience for me. I felt like [the music business] was a place where I was never going to be understood. I do have a backlog of material from the ‘80s that, at some point, I’m going to put out.

For MAGNET readers, the most famous person who’s worked at Satellite Park is Elliott Smith. What are your memories of him being there?
My boyfriend at the time, David McConnell, played in the band Goldenboy with Shon Sullivan, who played with Elliott. Elliott came over one day, and he stayed for six weeks. He never left during that time. I was in awe of his talent, so it was a little awkward. He recorded in my bedroom for a while. I’d fall asleep and wake up and there’d be Elliott Smith, singing across my sleeping body. It was an odd situation and terribly upsetting in certain ways. He obviously had a huge substance-abuse situation going on. At various times, I thought he was going to off himself in the house. It was something he talked about a lot, and a lot of it was said because he wanted to hurt DreamWorks.

He was that upset with his DreamWorks contract?
He wanted to make a point to them by [killing himself]. They’d record for days and days without sleeping. David would come up and say, “I feel like an athlete who’s been waiting his whole life to run in the Olympics and I’m being told to slow down.” They’d record these really amazing tracks, and Elliott would say, “It sounds too good. Fuck it up, please.” It’s like slashing a painting a little bit if you’re a producer or engineer. Elliott was convinced the mixes he did here were the ones he wanted, and he’d beg David to destroy the masters because he was afraid someone would put out different mixes of the record—which, in fact, they did. David couldn’t bring himself to destroy the masters. I guess the ultimate irony is that Elliott was completely straight at the end. He was not on any substances.

And just to clarify, the album he recorded at your studio is From A Basement On The Hill.
Yes. I actually have the mixes he wanted. I’ve never done anything with them. I don’t know what to do with them.

Has anyone asked?
No. They went to his previous producer and had him re-do everything. [Smith’s original mixes] are rougher, they’re not as polished. He wanted to go back to a more raw sound. He wanted it desperately—all he really talked about was wanting to go back to before they polished him up.

Let’s go back to you …
Oh, thanks! Let me try to be real cute and adorable now. I’m so up now.

What’s the story with John Waters wanting to sue you?
This is something I’m writing about for you. Basically, he didn’t want anyone to record “Female Trouble” because he was waiting to put out a compilation of Divine’s songs. Once an artist other than the songwriter records something, anyone can cover it. So we just had a little back-and-forth.

But you’re not adversarial with John Waters.
Oh, no. He was always very friendly, extremely polite and patient. I was pretty much begging him to let me put “Female Trouble” on [Invasion Of The B-Girls]. He was such a gentleman. He’s like a Civil War general.

He’ll need a bigger mustache for that. What are you working on now?
I’ve been working on a record for a few months. I’m going to put a single out. It’s more in the electro-punk vein. It’s back to my ‘80s roots. But it’s more like being influenced by people who were influenced by the ‘80s. I’m recycling myself. Self-cannibalism or something.

Last question: Josie Cotton is a stage name; Wikipedia says your birth name is Kathleen Josey. Where did Cotton come from?
I was actually born Josie Jones. My mother kept marrying and taking her maiden name back—she was married six times. Cotton is actually a family name from way back.

One reply on “Q&A With Josie Cotton”