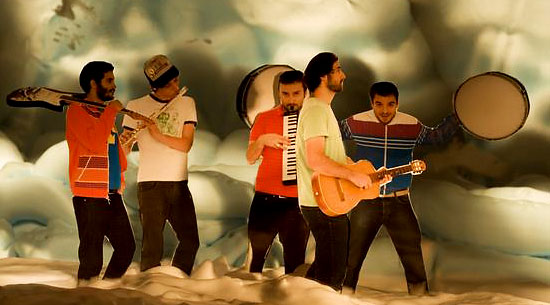 Stringfellow: Welcome to my official condemnation of the French music scene. In France, to succeed in music, you have two choices: 1) be the son/daughter of someone famous or 2) be the son/daughter of someone rich and/or powerful. The bands you know—Daft Punk, Phoenix, Air, Justice—are not bohemians by any stretch of the imagination. They all hail from Versailles, which is the Connecticut to Paris’ Manhattan. Sorry to burst your bubble, but none of these bands could have existed without the endless support and leisure time that is the birthright of the petits bourgeoisies. And so on; there’s a host of other similar ones that you don’t know about, since they are only big here. I am sure if I were to dig in the background of the latest thing from Paris, I would find a similarly jewel-encrusted skeleton in its very large, walk-in wardrobe. And on up to the highest bed in the land; in France, the standard is set: Be born the daughter of a gazillionaire, move to a country where his tarnished rep won’t be tracked by scandal sheets, have the best surgeons alter your face to the standards of the modeling industry, use your subsequent fame and (Photoshopped) looks to seduce the best songwriters in the land to write your albums for you, and one day you too can grow up to marry a president. France has perhaps the most disastrously ebbing music industry in Europe, and because of these standards—and their results—it’s not really a mystery why such a cynical strategy would lay waste to what should be, at least sometimes, a refuge from such thinking.

Enter the illogical world of Syd Matters. Not rich, not models, not singing in French: a sure recipe for disaster here. And somehow, Jonathan Morali and Co. are popular, respected and included in all the media. Their looks are laughable, unphotographable, but they’re my favorite works of art. Their last album, 2008’s Ghost Days, is superb. They sound to me like a 1974 version of Radiohead (a.k.a. Pink Floyd), with Nick Drake singing. But without the bombast of Floyd/Radiohead, their stuff is shadowy, reverby, delicate. Live, they trade instruments effortlessly, and despite the opacity of their music, they are not shoegazers in a concert setting. While all the swans preen and paddle from one end to the other of France’s very small pond, Syd Matters simply gets down to the business of making incredibly beautiful, intelligent, poetic music.