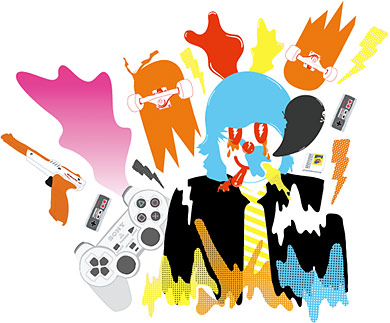 Norwegian design is alive and well. Employing the good kind of distortion, bright colors. (You’ll understand why when you go there; the eyes need relief from evergreen trees, blue sky and white snow.) These are some of my favorite graphic-design studios in Norway

1-Up: I worked with Joakim on the design for the DiSCiPLiNES album cover. I love his use of melting forms, colors, and best of all, he’s a horse thief; he slapped a photo of horse by Richard Kern right on our album cover. Had I not been been quickly vetted by Lydia Lunch, we would have been in lawsuit city. Mediocre artists borrow. Graphic designers cut, paste and make you figure out how to deal with it.

Yokoland: They are experts at incorporating childlike handwriting, found objects (scanned, photo’d and arranged to make letters) and, again, bright children’s-book colors for their work. They’re too expensive for me to use, but that’s because they are so damn fine.

Amp Design: These guys fed me some T-shirt designs that were so fucked up, they would have scared away anyone under 15 and over 50. In other words, perfect. They can get credit in the straight world, too, but let ’em loose, and they unleash all kinds of rave/Bosch nightmares. Excellent.